Home sales fell for the second month in a row in March, despite unseasonably warm weather and record low mortgage rates, 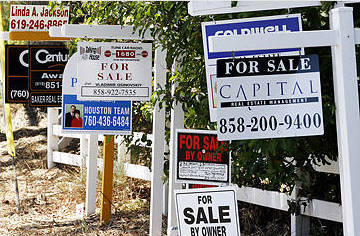 according to the National Association of Realtors. Existing home sales, which include single family residences, condominiums and townhouses declined 2.6% to a seasonally adjusted rate of 4.48 million.

However, the number of homes sold is still above last year’s pace. A tighter inventory of properties and lower home prices are showing further signs of strengthening in the U.S. housing market.

“The recovery is happening though not at a breakout pace, but we have seen nine consecutive months of year-over-year sales increases,” said NAR chief economist Lawrence Yun. “Existing-home sales are moving up and down in a fairly narrow range that is well above the level of activity during the first half of last year.”

An improving job market, record low mortgage rates and home affordability dating back to the 1960s is driving the rebound in home sales combined with a lower inventory of homes listed to sell on the market.

Inventory declined 1.3% to 2.37 million at the end of March, according to NAR figures, representing a 6.3-month supply at the current pace of sales in the U.S. However, the listed inventory of properties tabulated by NAR does not account for foreclosures and bank REOs held by many banks and lender servicing companies, estimated to be in excess of 2.4 million units.

A lack of condominium units and homes listed for sale in Miami and other markets is contributing to higher prices being paid in some areas of the country.

“If a home is in a popular city and priced average and is in even average condition we will get multiple offers,” said ReMax broker Joan Downing, who sells real estate 20 miles outside of Detroit, Michigan where home prices are rising.

Metropolitan Detroit sales rose for the ninth straight month in March, but were slower than in previous months, according to the local board of Realtors. Sales increased just 1% for the month in the four county area surrounding Detroit, which has been devastated by the real estate crash. However, the median price surged 18.7% to $68,850 from one year ago.

The median price is the mid-way point for homes that are sold, with half selling for more money and half for less, but does not represent the average price of homes that are selling.

Home listed for sale are expected to pick up moving into the summer months as more homeowners try to sell, with an additional increase in distress sales, including short sales. All cash sales still make up nearly one out of three transactions, with first time buyers accounting for 33% of home purchases in March.