On a visit near Las Vegas, Nevada, the worst affected city in foreclosures in the country President Barack Obama pledged $1.5-billion in federal aid to help the five states most heavily impacted by the real estate crash. Nevada, California, Florida, Michigan and Arizona will get federal aid under the program. 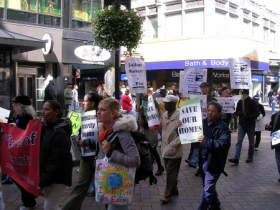 In each state the average price of homes has fallen more than 20% from the markets peak, according to the White House, which will fund the program with proceeds from the banks bail-out program. “The legacy of price declines together with the effects of high unemployment means that many working and middle-class families in these especially hard-hit areas are facing serious challenges, in many cases beyond what their families resources can handle,” the White House said in a statement.

An estimated 5-million homeowners have been foreclosed since fall-out of the foreclosure epidemic began more than two years ago. Another 15-million are forecast by Housing Predictor to lose their homes in the next six years.

Under the program, the Treasury Department will work with state and local housing agencies to address problems facing the hardest hit markets. The local agencies will be responsible for determining the priority of problems on a case-by-case basis.

The heaviest emphasis of the program is expected to target three areas: Unemployed mortgage borrowers, homeowners at risk of foreclosure due to being underwater on their mortgage and second mortgages and lines of credit.

Since the recession began in 2008 unemployment has risen to more than 20% in portions of California, Florida and Nevada while the national average has hovered around 10%. “In previous times,” the White House said, “when house prices were rising families with unemployment could often sell their homes for more than they had paid, using the proceeds to tide them over.”

Deflating home values in the hardest hit areas have made it impossible for most homeowners to sell. As unemployment rises more families are having difficulty paying mortgages, leading to the increase in defaults, which is near 5% nationally, according to the Mortgage Bankers Association.

Homeowners most at risk are being targeted by the program to receive aid since they do not qualify for a mortgage modification under current lending standards or owe too much on their homes. The program is intended to be a short term fix to a long term problem with temporary aid for the unemployed until new employment can be found.

More than 1 out of 4 homeowners are under water on their mortgages or owe more on their homes than current market value, leading to an unprecedented rise in mortgage walk-aways. The White House plan is also an attempt to stem the rising tide of walk-aways as homeowners lose confidence in whether their homes’ value will ever recover.

Local and state agencies are being urged to work with lenders under the plan to experiment with programs that would assist borrowers to negotiate with lenders to reduce mortgage principal balances. Negotiations could involve compensating lenders for at least part of the loss.

Difficulties can emerge, however, in implementing such programs. The other area agencies may work with lenders and borrowers on to rectify are second mortgages or lines of credit liened against homeowners’ property. To smooth the coordination and help homeowners get a modification that works, funds can be used to pay incentives to second mortgage holders.