The White House $1.5-billion bail-out of troubled homeowners will help only a small fraction of those in need of aid, administration officials acknowledge. The foreclosure crisis, first forecasted by Housing Predictor nearly three years ago has claimed an estimated 4.5 to 5-million homes since it began. 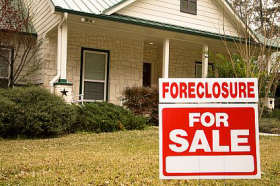 The crisis has become so massive that Obama administration officials realize its enormity and the cost that it is likely to have on the U.S. economy. “There’s not enough money in the Treasury (Department) to stop every foreclosure,” President Barack Obama told a gathering at a Town hall style meeting in Las Vegas, Nevada which has been devastated by the foreclosure epidemic.

The bail-out funds, which will come from the Troubled Assets and Relief Program will be administered by the Treasury Department, and provided to homeowners through local community housing assistance programs.

Three classes of homeowners are targeted for the funds: Mortgage holders who are under water on their mortgages and are at risk of foreclosure, homeowners who have lost jobs due to the economy and others who have second liens or extended lines of credit on their properties. All three types are unable to qualify for mortgage modifications.

White House officials were careful not to site a figure or say how many homeowners they hope to help under the program, but do acknowledge that it’s a step in the right direction. The mortgage modification program started at the urging of the White House has been heavily criticized as a failure for only modifying 116,000 mortgages its first year.

“Government has a responsibility to help deal with this problem,” Obama told the Las Vegas audience. “What we can do is to help responsible homeowners stay in their homes so home values can begin to rise again.”

High unemployment in the five states that will receive aid has added to declining values of homes. Detroit, Michigan, one of the targeted states has unemployment that tops 14%. Nevada, California, Florida and Arizona will also receive the federal aid.

Economists contend that the majority of the economy will recover over the next year, but the housing sector will lag as a result of the remaining excess inventory of homes and other residential property. The White House bail-out pledge of $1.5-billion is another part of the Obama administration’s housing rescue plan, which has taken at least ten other steps to help the housing market recover.

New home and commercial construction is down to less than 25% of what it was during the boom, sending millions of workers to the unemployment lines. Retail sales have also been damaged as a result and other areas of the economy are also ailing.

However, the absorption rate or time it will take for homes to sell that are either listed for sale on the market or will soon be for sale will take a number of years for the market to absorb. Until the supply of homes and other property reaches a balance prices will continue to decline in most markets.