Respondents to an online poll have given the U.S. government a no confidence vote when it comes to helping the housing market. An 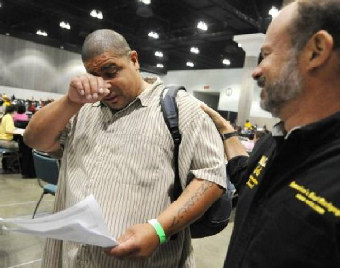 over-whelming majority of 84% who were surveyed said the government will not take major steps to help the housing market.

The sweeping decision comes five years and more than 7 million foreclosures after the real estate market collapsed. Housing values in the majority of the country have suffered major losses, which few observers feel will ever be attained again in their life times. Home prices have fallen in all 230 U.S. cities Housing Predictor tracks, some by as much as 80% from the markets peak highs.

Especially hard hit cities in five states, including Arizona, Nevada, California and Florida are seeing an increase in home sales, but mainly as a result of deeply discounted foreclosure properties and bank short sales.

The Obama administration and the Fed have thrown a series of efforts at the markets in order to help stabilize home values, including an aggressive refinancing program. But more homeowners underwater on their homes are being turned down for refinances than seem to be receiving them.

Another round of measures are expected to be offered by the White House to assist homeowners at risk of losing their homes, but that isn’t expected until after November’s presidential election.

Considering U.S. government programs have done little to actually help the market, do you feel the government will ever take major actions to help the housing market?