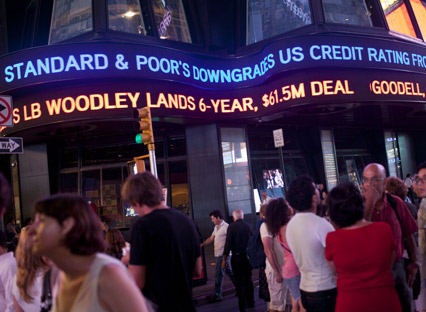 of U.S. credit. The drop in Treasury rates, hitting 2.32% on the benchmark 10-year note in late afternoon trading was a reversal from what financial analysts had expected, sending mortgage interest rates to new lows.

The drastic drop in mortgage rates set by banks and mortgage lenders is an effort to re-energize home buying and refinancing even as other financial markets crater. The heavily monitored Dow Jones Industrial average dropped 634.76 points in heavy trading on the New York Stock Exchange to record the worst day of trading in almost three years.

The average rate on a 30-year fixed rate mortgage was 4.16%, according to MoneyRates.com late Monday. The rate represented a major decline from the Freddie Mac average last week, which was 4.39% on Thursday. The rate on the fixed 15-year rate mortgage also saw a huge drop to an average of 3.16% from 3.54% in Freddie Mac’s survey last week.

The rate reported by Freddie Mac on the seldom purchased 15-year loan signaled a major new threshold for the mortgage Thursday and a new historic low for the loan down from 3.66% just two weeks ago. Banks and mortgage companies offering home loans have dropped rates to get home buyers and those shopping for refinancing to get off the fence. A single point drop in mortgage rates is usually worthwhile for consumers to refinance home mortgages. 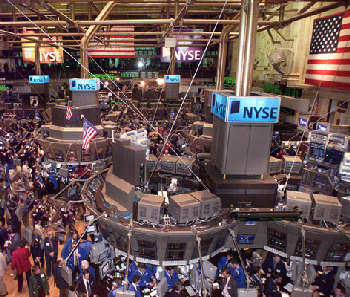 The 5-year Treasury indexed adjustable rate mortgage also hit a lower average Monday than it had been at late last week, averaging 2.77%, down from 3.18% just last Thursday. The massive drop in mortgage rates also demonstrates the volatility of the nation’s economy after the S&P downgrade last Friday evening. Should Congress and the White House not agree on major spending cuts soon, Standard and Poor’s said the U.S. economy could be downgraded again fairly soon.

The drop in mortgage rates wasn’t anticipated by analysts, but came in reaction to investors’ sentiment that the real issues with the U.S. economy rest in the nation’s deficit and broader issues related to the troubled U.S. economy and the housing market, where foreclosures are already rising after stalling during the first half of the year. However, financial stocks also led the New York Stock Exchange lower, indicating that there is a lack of confidence in banks and mortgage lenders. Bank of America stock led the market lower in active trading.

The move indicates that investors in financials are like the majority of Americans, who don’t believe public statements made by bankers and leaders in the financials after banks and mortgage lending companies sold home loans to just about anyone they could to sink the U.S. economy and trigger the foreclosure crisis.