The crisis is hitting home. An overwhelming majority of respondents to 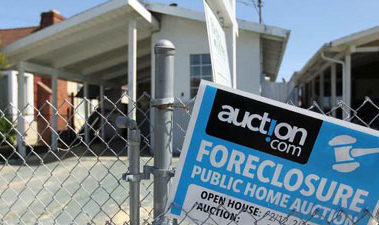 a new Housing Predictor poll say they are directly affected by the foreclosure crisis in their own neighborhood.

The survey found that 74% of all those who took part in the online survey from all 50 U.S. states said they think the foreclosure crisis is affecting their own neighborhood. The remaining 26% said it was not affecting them, but many of those may not be aware of the millions of vacant homes that have already been left by mortgage holders to be foreclosed at a later date.

More than 7-million residential properties have been foreclosed since the crisis started more than four years ago. Eighteen states have been designated by the U.S. government as the Hardest Hit areas of the country, including California, Florida, Michigan, Ohio, Nevada and Georgia.

The crisis is pressuring home prices in all but a couple of dozen communities across the country, sending home values lower, and threatens to take housing prices to levels that have not been seen in decades. The real estate crash has exceeded the worst crash in history during the Great Depression with the number of foreclosures forecast to more than double in coming years.

Housing markets in Florida, California, Nevada and a handful of other states have seen home values drop in many neighborhoods as much as 80% from the markets peak high.

Do you think your neighborhood has been directly affected by the foreclosure crisis?