How should we solve the U.S. mortgage crisis? That’s the BIG question White House officials are starting to ask representatives of the lending industry, academic experts and consumer groups in efforts to come up with a plan to reform the nation’s troubled mortgage giants, Fannie Mae and Freddie Mac. 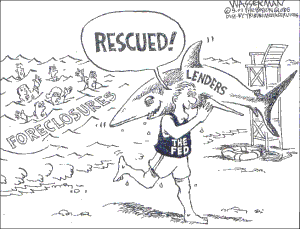 The Obama administration is trying to achieve the goal of repairing the nation’s tax payer subsidized mortgage lending system by going the extra mile to get ideas from the public on just how it should go about the process of fixing the country’s broken mortgage system. Questions have been designed to generate input from a wide variety of constituents, according to White House officials.

The initiative marks a major shift in the way the White House and other federal agencies interact with the public at large, expanding the process to gain political points with Republicans and others who have been critical of the administration’s slow response to the mortgage crisis.

“A well functioning housing finance system is critical to the long term stability of the housing market,” said Treasury Secretary Tim Geithner, who has called for the reform of Fannie Mae and Freddie Mac, which currently provide more than 80% of all home mortgages in the U.S. “Hearing from a wide variety of perspectives as we embark on this process is an important part of establishing a more stable and sound housing finance system for the American people.”

The White House is seeking public input in two ways. The public may offer written responses to questions online published in the Federal Register at www.regulations.gov The administration also plans on holding a series of public forums across the nation to determine the best ways to reform Fannie Mae and Freddie Mac.

Among the questions being asked: “How should federal housing finance objectives be prioritized in the context of the broader objectives of housing policy?

How should the current organization of the housing finance system be improved?

What is the best way for the housing finance system to help ensure consumers are protected from unfair, abusive or deceptive practices?

The issue has become a political liability for the White House and other politicians since the financial crisis exploded after years of bad mortgage lending practices, fraud and Wall Street manipulation triggering the foreclosure crisis. More than 7-million homes have been foreclosed since the crisis started more than two years ago.