The two U.S. giant credit rating agencies, Standard and Poor’s and Moody’s are likely to downgrade the nation’s credit rating from AAA to 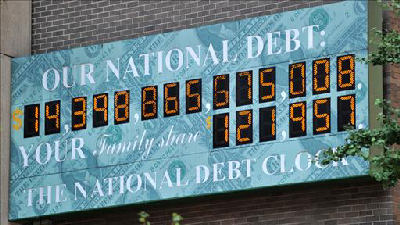 double A as a result of the government’s financial boondoggle. Should that occur, the impact is going to be massive for mortgage interest rates and other loans.

Home mortgage rates could see the highest jump they have since the beginning of the financial crisis, and other loan rates would follow, increasing the cost to borrow money to buy a car, purchase other items on lines of credit and skyrocket credit card rates.

Given the agencies history, however, of mistaken ratings in the real estate collapse, the AAA ratings do little more than keep governments and other investors lending to the U.S. government at bay.

After all what can any government’s credit rating really be if it is $14 trillion in debt?

S&P said in an official statement months ago that a long term credit downgrade of the U.S. economy may be directly related to the foreclosure crisis, which tax payers have bailed out through Freddie Mac and Fannie Mae directly at a price of more than $148 billion. But that isn’t the total paid for at all by tax payers. More than $800 billion more and counting in mortgage backed securities have been purchased by the Federal Reserve. 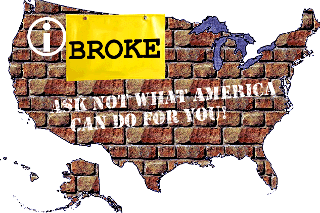 S&P analysts say they expect “extraordinary” steps to be taken by Congress to assist large banks and financial institutions, which would essentially result in additional bail-outs of the financial sector to fix the housing market and the economy. But considering the current political climate and anger among U.S. citizens’ financial analysts shouldn’t count on Congress coming to the financials’ rescue any time soon.

In the complicated world of high finance that means it’s inevitable there will be another round of quantitative easing by the Fed. You can count on QE3 to provide the next step of financial relief to keep the stock market and the economy sputtering along.

What do the credit agencies ratings mean in relationship to the U.S. economy anyway? That’s a good question considering S&P and Moody’s both missed the real estate bubble and calls related to mortgage backed securities and the housing crash all together, rating banks and mortgage lenders at their highest levels possible for investors.

The agencies are making an effort, however, to straighten out there acts and save face as they face Congress in upcoming hearings over the financial crisis and changes that will be adopted by Congress through Dodd-Frank financial reform. The ratings act as a calling card to keep the agencies in business in these tight economic times.