Destin, Florida — While thick oil piles up in the marshes along the Louisiana coastline from the BP oil spill, beaches along the Florida panhandle remain clear of the sledge with the exception of a few tar balls floating ashore in spotty areas. 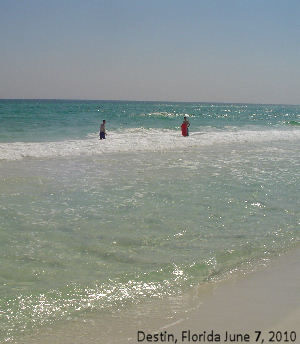 Growing indications show that the massive oil slick may miss the Florida panhandle, getting caught up in the Gulf Coast Stream and move south towards the Florida Keys. Accuweather.com meteorologists say pieces of the oil slick located in the central Gulf are breaking off and beginning to enter the loop current.

Weather models show drifting pieces of oil cutting under Key West, Florida. Patches of oil could get swept into the Gulf Stream and around the tip of the Florida Peninsula, which has more coastline than any other state in the nation.

The beaches along the Florida panhandle remain open with beach-goers flocking to their favorite spots all throughout the panhandle, including Destin, where swimmers were out in force today enjoying the summer sunshine. Only a handful of tar balls were spotted near Destin over the weekend as the emerald waters along the gulf remain clear enough to see the bottom of the ocean. 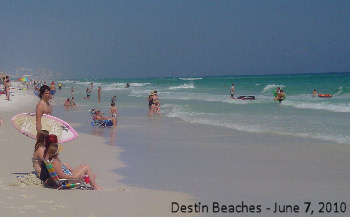 More than 1,000 workers hired by BP are working in hazmat suits to clean-up any tar balls that come ashore from the Alabama-Florida boarder east to Navarre Beach, Florida.

However, thick tar balls of oil have hit the coastline in neighboring Alabama in spots, but have not been enough for emergency management officials to be concerned about in most areas.

Alabama Governor Bob Riley is angry about BP oil’s lack of sending aid to the area. “We’re still not getting the help we need,” said Riley at an afternoon news conference. Riley said the federal government has not kept its promise to the state by sending whatever was needed to protect the states coastline. The state still lacks the boons it needs to block oil from reaching its beaches, should the main slick of oil move towards the state coastline.

The state also needs more boats to increase oil skimming efforts off the coast to protect the state’s coastline.

The chances of oil moving back towards Alabama is unlikely, according to meteorologists, who say most of the oozing mess should move back towards Louisiana later in the week.