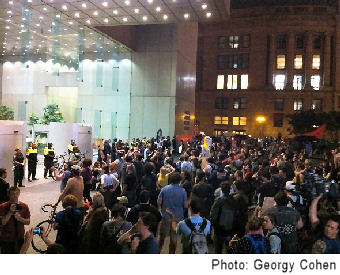 lending practices the nation’s largest bank has used against homeowners. Dozens of families facing foreclosure were among the estimated 3,000 people carrying banners, banging drums and confronting the lender for its role in the financial crisis.

The protest signals a growing nationwide trend against big banks and corporations as the peaceful occupation of Wall Street in New York City enters its third full week. Demonstrators have been occupying a section outside of Wall Street in the financial district of Manhattan to bring attention to the damage big banks, including BofA, Wells Fargo, JP Morgan Chase, CitiGroup and other financial firms like AIG have done to the U.S.

Twenty-four protestors were arrested for trespassing on BofA property by Boston police in a gesture of civil disobedience. But Boston police Commissioner Edward Davis said it was unlikely the group would face serious charges.

An estimated 7.7 million homes have been foreclosed in the U.S. since the foreclosure crisis started, and another 7.3 million residential properties are forecast by Housing Predictor analysts to be foreclosed by the end of the crisis. 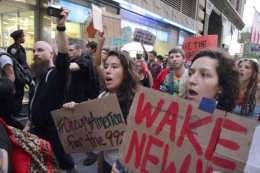 “The mortgage bubble created by Wall Street pushed predatory lending on urban communities, and since the bubble burst the fallout has been catastrophic,” said Rachel LaForest, executive director of the Right to the City Alliance, who is leading the protest in Boston. “Unemployment and foreclosures have hit communities of color first and worst. But it is urban communities who are at the forefront of the movement to fight back.”

Bank of America is increasing efforts to speed up foreclosures against homeowners in default on mortgages after moratoriums by lenders slowed their progress earlier this year. The nation’s largest bank has more than 1.4 million homes in default, more than any other lender, many of which are subprime and ALT-A mortgages, sold to many borrowers who bank employees said that they would never be able to repay. 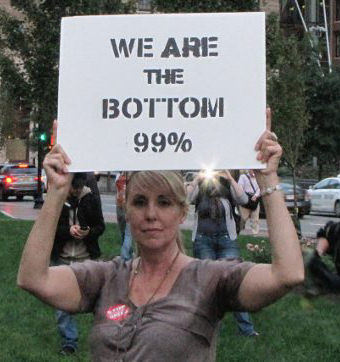 “I’m sitting-in at Bank of America so that my neighbors, and me can stay in our homes,” said Presley Obasohan, who is fighting a home foreclosure against Bank of America. Obasohan is underwater on his Dorchester, Massachusetts home, where home values have dropped to less than half of what they reached during the peak.

“So many people have been thrown out of their homes or lost their jobs needlessly because of mistakes made by Wall Street Banks. Yet it’s the banks who are now rewarded with billions in tax refunds.”

The Obama administration has made efforts to deal with the foreclosure crisis, implementing more than a half a dozen programs to aid those at risk of losing their homes. But little real action is expected since the administration has not yet developed a formal housing plan. Analysts contend that without a formal plan to deal with housing, which would include a new mortgage finance system, home values throughout the majority of the U.S. will continue to decline.