By Ryan Jackson
The boom in new apartment rental construction will lead to a rebound in homeownership, according to UCLA real estate economist David Shulman. 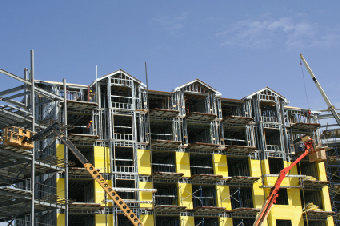 The researcher made the prediction in the university’s Ziman Center real estate economist letter.

“After an agonizing six year decline where nearly $7-trillion of wealth was destroyed, the housing economy is now in the process of rebuilding,” wrote Shulman.

Existing homeowners suffering through foreclosures and tougher mortgage qualifying requirements coupled with consumer doubts about home prices increasing sent homeownership from a record peak 69% in 2004 to 66%. Homeownership is expected to take another slide this year.

The UCLA economist who has been researching real estate trends more than 20 years contends that the housing market has “bottomed and a recovery is underway.” The marketplace is still troubled with the foreclosure crisis and an over supply in some regions of the country of discount priced bank owned REO properties.

Shulman says that the current boom in new apartment construction should exceed 400,000 units in the U.S. by 2014 and “implode itself” as publicly owned real estate companies charge as much as possible for rents to scare-off renters. Vacancy rates lower than 5% in many areas provide a ripe sector for investors searching for higher rates of return on their investments.

Rental rates charged on lease renewals are averaging 4% increases as many of the publicly traded real estate investment trusts cash in to maximize returns. Some are reporting year-over-year rent hikes in the order of five to seven percent.

“This boom in multi-family construction will have within it the seeds of its own destruction,” wrote Shulman. “As rents rise, consumers will shift out of rentals into ownership units. The American Dream of homeownership maybe comatose, but it is not dead, and the wake-up call will come in the form of higher rents.

“By 2014, supply will begin to outpace demand. New physical supply will be augmented by the renting of existing single family homes by a growing number of investor groups. Although much of that supply is on the urban fringe, many observers forget that sub-prime lending financed and refinanced homes in central core areas. As rents increase those areas will become ripe for gentrification and become competitive with traditional rental housing.”