Talks between State Attorney Generals in Washington, D.C. and representatives of the Obama administration have yet to provide a settlement for the robo-signing scandal, 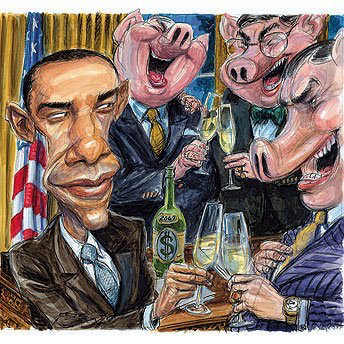 and many of President Barack Obama’s critics expect that any agreement with bankers will be a sellout of mammoth proportions.

Negotiations between the U.S. Justice Department and the majority of 50 state attorney generals have been dragging on for months, while the admitted forgeries by bank servicing employees on foreclosure documents became public knowledge one year ago last week.

Iowa Attorney General Tom Miller, who has been heading up the talks, says banks and mortgage lending companies won’t be excused from criminal prosecutions as part of any agreement state attorneys reach. Acting U.S. Comptroller of Currency John Walsh says that determining the number of homeowners wrongfully foreclosed will take at least a year.

Negotiations have centered on an agreement to provide a fund to pay homeowners who have been illegally foreclosed. With the housing market in an economic depression and the rest of the country teetering on a second recession, if it isn’t already in one, there is little real hope for much of a deal to materialize out of the talks.

Settlements paid to homeowners who have been wrongfully foreclosed would only be a partial fee for their injustice after having been forced from their homes to find new shelter. The effort on part of the Obama administration is simple politics 14 months before the next presidential election.

A settlement for Obama would gain the president with the lowest approval rating in U.S. history somewhat of a reprieve. But any settlement is likely to come at a high cost for homeowners who have been damaged by the foreclosure crisis or face the risk of foreclosure in the future. As many as 4.5 million foreclosure files will be examined to determine the gravity of the fraud, according to Walsh.

Combined with efforts made in part by the Bush administration, bankers have already been bailed-out to the tune of billions of dollars by U.S. tax payers. For any agreement to be workable in the future for tax payers and victims of bankers’ fraud, the agreement would have to include exclusions for mortgage holders to sue for future misdeeds.

Otherwise any agreement would be useless for those who have been damaged. That’s why at least three states, including New York and Massachusetts have already vowed to not sign any agreement that gives banks a release from their responsibilities. The lenders responsibility for the mortgage crisis is a critical issue since they developed, marketed and in many cases misrepresented new mortgages as vehicles to sell loans to anyone who could sign their name.