Bust or Boom
How to Make Money on Investment Property

Here’s a scenario that most of us have encountered: You are in your car 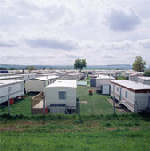 miles from nowhere. Driving across an endless rural landscape pocked by random truck stops and the occasional ramshackle trailer court, you catch out of the corner of your eye a fading sign springing from the edge of a cow pasture. “Real Estate for Sale,” the peeling black paint reads, “$250 per acre.”

“Yeah, right,” you think to yourself. “Who in the world would want to live here?”

Twenty years later, you kick yourself as you read about the real estate boom in that very same place, and the $250 per acre rural raw land has been re-zoned residential and is now selling for $19,000 per acre.

That’s exactly what happened in rural areas surrounding places like Bozeman, Montana, Davie, Florida and Jackson Hole, Wyoming, just to name three. Across the nation, small rural communities have seen a staggering influx of new residents over the past decade and a half. Traditionally, population growth follows the opening of a new corporate branch or military base. As some in the real estate industry have been known to say, just look for a new McDonald’s and buy there.

Indicators of whether or not rural property will skyrocket in a given area can be found in various state and federal budget appropriations. For instance, in Brunswick County, North Carolina, a new international shipping port is in the works. Expected to be completed by 2016, federal, state, and private monies will fund the near $1 billion project. The new port is anticipated to bring approximately 4,000 jobs to the Wilmington area with forecasted growth in Brunswick County of 19.4% between 2010 and 2020.

Then there’s the law of supply and demand. Middle-class and blue-collar buyers continue to seek out housing in areas that are still affordable. The demand decreases supply causing an upward spiral in property values. And it also creates a workforce that expanding companies seek when branching out.

James Renzas, president and CEO of Location Management Services, a Mission Viejo, Calif.-based site location company specializing in negotiating financial incentives and tax credits for Fortune 500 firms, describes predicting whether or not an area will boom as a “chicken or egg” scenario.

“Sometimes housing development will draw industry because it draws a pool of labor. In other cases, a company will make a location decision because of logistics requirements,” said Renzas. “In a rural area a food processing facility goes in, maybe hires a couple hundred people, and then all of the sudden there’s a demand. Then people start moving in as a result of the opportunities that are available.”

Over $50 billion in state, federal and local incentives are available to expanding and relocating companies each year. By keeping tabs on the intentions of major corporations, one can learn where they intend to expand.

“I would look for areas that are located to serve growing markets, but are located in rural areas,” said Renzas. He relayed that a couple of rural areas that will soon see corporate expansion are Monroe, Ohio, a rural area halfway between Dayton and Cincinnati, and Upper Macungie Township, Pennsylvania.

Another indicator of potential growth can be found by following the activities of the many new renewable energy companies that have been springing up around the country, and tracking industry plans to tap various sites for natural gas and mineral reserves. The Western U.S is an area where the demand has exploded for sustainable energy.

One way to search for the right place to invest in land is to look up the company’s SEC 10-K filings. Usually they are posted online. Whether you’re looking to find a perfect spot for a new home or seeking a profitable investment, buying in the path of progress will assure an asset of security.