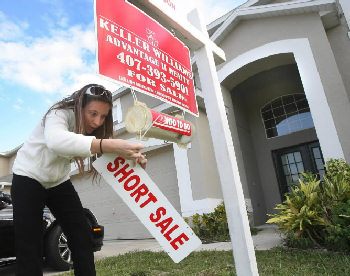 double the number of short sales approved in 2009 last year.

Short sales should also experience another major boost in volume in 2012 after 49 state attorney generals came to a $25 billion settlement with the nation’s five largest banks over the robo-signing scandal. As part of the agreement, lenders agreed to make efforts to short sell a home as a last ditch effort to assist troubled mortgage borrowers before foreclosing.

Short sales are projected to top 400,000 homeowners by Housing Predictor analysts in 2012, a downgrade from 500,000 projected for the year. An increase in home foreclosures triggered by a catch up in bank servicing operations to formally repossess homes in expected to drive the hike in formal foreclosures.

More than 1-million U.S. homes are forecast to be foreclosed by bank servicers in 2012 as part of the nation’s on-going foreclosure crisis.

A lack of discount priced foreclosure homes or bank owned REOs offered for sale are driving many real estate agents to show homes offered as short sales in some U.S. housing markets. For the first time, short sales are receiving multiple offers in many areas of the nation.