Vice presidents have historically played the fool to U.S. presidents, and Vice President Joe Biden is quietly proving to be cast better than most Hollywood producers could dream.

In limited media coverage, the vice president announced a milestone of 200,000 homes being weatherized with Troubled Asset and Relief Program funds on a trip to Manchester, New Hampshire last week. Didn’t hear about it? Neither did hardly anybody else even though the White House announced the event with all the pomp and circumstance it gives major news events, receiving very little media coverage. 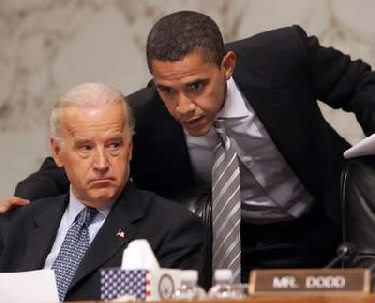 Perhaps that’s because more than 7.5-million Americans have lost their homes to foreclosure, and less than 500,000 have received mortgage modifications through the president’s Making Home Affordable modification program. The event occurred on the same day President Barack Obama was playing golf ironically with his banking buddy. There hardly seems to be any appetite for homes being weatherized when millions are being kicked out of theirs.

“Thanks to the Recovery Act, thousands of construction workers across the country are now on the job making energy-saving home improvements that will save working families hundreds of dollars a year on their utility bills,”  the vice president told a small crowd in Manchester.  “From replacing windows and doors to adding insulation, these are small changes that are making a big difference for American workers, manufacturers and consumers.

“We’ve hit the accelerator on the weatherization program, making over 200,000 homes more energy-efficient already, and are now full speed ahead to meet our original target of weatherizing 600,000 homes nationwide.”

Biden visited Manchester, where the “DuPont family,” no doubt distantly related to one of the richest families in America is expected to save over $600 a year on their utility bills once their weatherization project is completed, according to the White House. The news release issued by the White House went on to say that New Hampshire (being one of the coldest states) has been a leader in the federal weatherization program with more than 1,000 homes that have been re-insulated since June

After ramping up last year, the Weatherization Assistance Program is now weatherizing homes at about 25,000 a month.  The White House Making Home Affordable plan intended to modify between four and five million homes when it was originally launched 20 months ago is responsible for less than 500,000 mortgage modifications, a figure that critics of the plan find laughable.

In fairness, the weatherization program is credited with creating thousands of jobs, according to the White House, supporting 13,000 jobs in the second quarter of the year, including 120 new jobs in New Hampshire. Maybe Biden should have made a point of that as he sells the Obama administration’s program across the country and left the DuPonts out of the picture.