It’s been 35 long years since Peter Finch starred as a deranged ex-TV anchorman in the academy award winning movie Network. His words 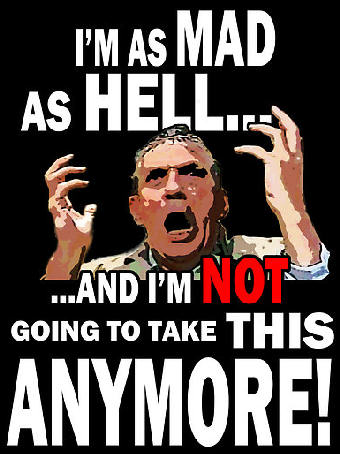 of wisdom ring as true today as they did in the 1970s when demonstrators hit the streets opposed to the Vietnam War.

“I’m Mad as Hell and I’m Not Going to Take it Anymore,” yelled Finch from behind his Network TV anchor desk in New York City. In the truest images of real life reenacting art decades later, today Occupy Wall Street protestors have spread their messages across more than 1,500 U.S. cities from New York. In just one-month the movement, born outside of the New York Stock Exchange in the Financial District of Manhattan is gaining momentum.

People are “Mad as Hell” in the U.S. Some recognize the evils of the bankers and Wall Street tycoons that first developed the products and financial instruments in order to make enormous profits from the Collateral Debt Obligations (CDOs) traded on Wall Street that started this mess. Others realize that subprime mortgages, once at the bottom of the mortgage lending business regarded as “low-life loans” were used to out-wit and out-rule the poor and lower income class.

Whatever, the destruction the CDO market had on the U.S. economy, the manufacture of new home mortgage products like ALT-A mortgages that gave loan borrowers up to six different ways till Monday to pay their mortgage payments had at least an equal death blow on the nation’s economy.

It was after all the development of new financial products made in America that has brought us to this point. Hundreds of U.S. banks have gone bust, taken over by the FDIC as a result. One of the biggest mortgage lenders, Countrywide Mortgage went down in flames and was taken over by Bank of America management at the height of the financial crisis on Wall Street. 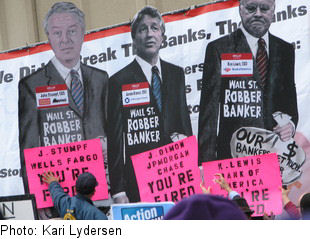 There is nothing government does better than manufacture a crisis of its own making, and that’s clearly what happened with the financial crisis three years ago this past summer when former Treasury Secretary Hank Paulson and his cronies went to Wall Streets biggest commercial banks, and bailed them out. Of course, the crisis was in the making for years before that. Government leaders, including President George W. Bush and others just didn’t chose to deal with it until it exploded like a bad TV movie on TV screens all across America.

As Occupy Wall Street protests grow across America, people at last seem to be waking up from their long slumber. It was nearly five years ago that Housing Predictor first forecast the crisis. Since then, around 7.6 million American families have been foreclosed and kicked-out of their homes. The banks still haven’t negotiated a deal with the states Attorney Generals over the robo-signing scandal, and continue to refuse to modify the majority of mortgages at risk of foreclosure.

Don’t the banks have some responsibility here? After all it was the banks that re-wrote their own mortgage qualifying rules essentially by making a home mortgage to anyone who could sign their name. And it is these same bankers who raked in record profits in the billions of dollars, and pocked most of the cash during the heyday of the real estate bubble that they manufactured with their own concoctions.

Certainly had the public’s trust not been violated and people had known that a real life case of musical chairs was being played on them, most mortgage borrowers would have run for the hills before they signed their name on the dotted line.