The U.S. is divided about any good that will come from protests associated with the group Occupy Wall Street that started 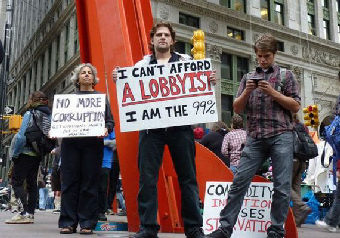 demonstrations in New York City and have spread across the world, according to a new opinion poll.

The survey was taken over the past two weeks, during which protests moved from outside of the New York Stock Exchange in the financial district of New York City across the globe. Demonstrators have centered on financial institutions and Wall Street greed that produced the financial crisis, resulting in the worst economy since at least the Great Depression.

Fifty-one percent of respondents said the protests would act to help produce social change, but nearly another half or 49% said they do not expect the protests to develop any meaningful change. Demonstrations that triggered major social changes in the 1970s over the Vietnam War lasted years, many of which started on college campuses before changes were finally implemented by policy makers and the U.S. pulled out of the war. 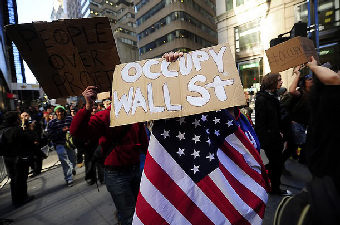 Occupy Wall Street protests have broken out in at least 1,500 U.S. cities and towns, and attracted an estimated 100,000 protestors in Rome, one of many foreign countries that saw demonstrations over the weekend. The world’s financial system has suffered trillions of dollars in damage as a result of financial instruments that were invented and sold as securities in U.S. financial markets at first to secure home mortgages.

Any division that exists among protestors and financial investors seems to be minimized as banks and financial firms increasingly admit errors they made during the financial crisis. Rebuilding confidence among consumers in the financial system, including big banks may take years to develop, if they are able to renew confidence at all after the U.S. government bailed-out banks, the auto industry and trillions of dollars in mortgage financing that ended in foreclosures.

Will protests like those in New York and Boston help to develop change?