By Kevin Chiu
Completing her term as the head of the Federal Deposit Insurance Corp. (FDIC) with a last appearance on Capitol Hill, Sheila Bair warned 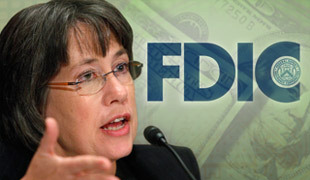 a Washington, D.C. audience to be aware that the financial crisis is rooted in real estate, which is blocking an economic recovery from developing.

“The large and persistent declines in real estate values in many areas of the country have hurt both the demand for small business products on the part of their Main Street customers as well as the ability of small businesses to borrow against the real estate collateral they own,” Bair said in remarks given during a speech.

During her five-year term Bair had been a champion for consumers, and righting the wayward financial industry’s wrongs from happening again. Too Big to Fail became a headline that over-shadowed the financial industry, which was bailed out with the largest use of tax payer funds in U.S. history. 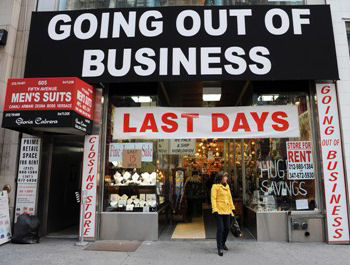 The chairwoman’s legacy in Washington will also include more banks that have failed than at any other time in U.S. history as a result of the financial crisis. A record 158 failed banks were taken over by the FDIC in 2010.

Perhaps more than any other former Washington insider, Bair understands the plight of the nation in terms of the economy, and its struggle to recover.

“Although the real estate market downturn is now entering its sixth year, signs of recovery remain elusive,” Bair said. Some 2.25 million mortgages remain mired in the foreclosure process “that has been slowed by inefficiencies on the part of mortgage servicers, by deficiencies in the their handling of the legal paperwork, and by a frustrating inability to move quickly enough to modify troubled loans while there is still a chance to keep them out of foreclosure.”

Bair was appointed to head the FDIC by President George W. Bush, and remained in office to assist the Obama administration during the financial crisis. President Barack Obama is expected to name a permanent replacement for the position soon. In the mean time, vice chairman Martin Gruenberg has assumed the role of acting chairman.