A veteran real estate attorney is suing seven major U.S. banks in what may be a precedent setting case

for allegedly defrauding hundreds of thousands of homeowners.

Calabasas, California attorney Philip Kramer, who has been practicing real estate law more than 25 years, is citing laws and procedures that banks were previously unaware of in lawsuits filed against the nation’s largest mortgage lenders.

“I am convinced that for the first time that aggrieved homeowners are going to get a fighting chance,” said Kramer. “Until now, the banks have had their way, using and abusing the system at the expense of distressed homeowners across the nation. Now, after years of abusing homeowners and the greater public, the ‘bank bullies’ are getting a good stiff legal punch in the nose.”

Kramer has filed lawsuits against Bank of America, JP Morgan Chase, Washington Mutual, One West-Indy Mac, GMAC, Wells Fargo/Wachovia and Citibank which he claims have allegedly defrauded hundreds of thousands of homeowners. The suits follow months of troubles for the lenders, who were sanctioned by the federal government last week for improperly handling foreclosures in the robo signing scheme, reportedly affecting more than 300,000 homeowners.

A lawsuit filed on behalf of more than 1,200 homeowners against Bank of America, which purchased defunct Countrywide Mortgage is seeking damages on allegations of bank fraud, and violations of county, state and federal consumer protection laws. Kramer says relief is being sought “to stop the illegal sale of plaintiffs’ homes,” force BofA to cease and desist from their conduct and compensatory damages on behalf of the plaintiffs. 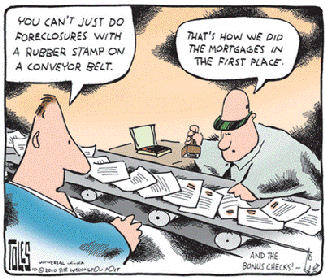 The lawsuit claims the bank disregarded underwriting standards and implemented fraud that was concealed from borrowers and other mortgagees on an unprecedented scale.

“Bank of America perpetrated a massive fraud, constituting unfair competition on borrowers that devastated the values of their homes, resulting in the loss of net worth as the bank enriched itself by knowingly selling financial instruments based on a value the bank knew to be unwarranted,” the attorney said in a statement.

As a result of the actions taken by Countrywide Mortgage at the time before BofA took the lender over at the height of the financial crisis, borrowers lost equity in their homes, credit ratings were destroyed and mortgage holders suffered massive losses. An estimated 7-million homeowners have been foreclosed since the crisis began.

Countrywide was the nation’s largest mortgage lender prior to its financial meltdown.

The suit accuses Countrywide founder and CEO Angelo Mozilo of knowing that Countrywide could not sustain its business unless it used its size and large market share to systematically create false and inflated property appraisals. The suit alleges that Countrywide used “false property valuations” to induce borrowers into refinancing homes and that Mozilo knew as early as 2004 that the mortgages were unsustainable and would result “in a crash that would destroy the equity invested” by borrowers.

The lawsuits coincide with a court decision in a class action case in Maryland that invalidated more than 10,000 foreclosure cases managed by GMAC Mortgage because affidavits in the cases were signed by a GMAC robo signer, who attested to the authenticity of foreclosure documents without any direct knowledge of them.