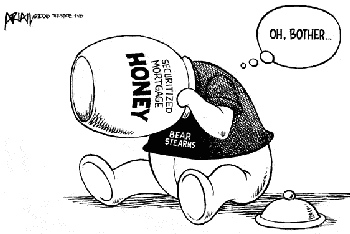 four years after the bank failed in a major disgrace at the height of the financial crisis on Wall Street.

The settlement has received preliminary approval in U.S. District Court, and will pay shareholders in the once powerful investment bank $294.9 million to settle litigation filed by Michigan Attorney General Bill Schuette. Schuette sued Bear Stearns and Deloitte & Touche accounting in 2008 on behalf of investors across the  U.S.

In an emergency session negotiated by former Treasury Secretary Hank Paulson and the Federal Reserve, the bank was sold to JPMorgan Chase as the government worked out a $785 million program to bail-out other major banks on Wall Street.

After reaching an agreement to pay just $2 a share for the firm, JPMorgan executives later gave-in and agreed to pay $10 a share for the failed bank, which saw its stock value plummet from a high of $170 to just $30 the weekend before emergency government negotiations took place.

More than $18 billion of real Bear Stearns stock value vanished within days on growing fears that the major Wall Street firm was failing, despite more than 125 years in business.

Bear Stearns insiders had bet the majority of the bank’s real value on risky mortgage backed securities and Collateral Debt Obligations (CDOs), which investors had become fearful of on Wall Street bringing an end to most of their trading at the height of the financial crisis.

The securities would eventually be determined to be the major cause of the financial crisis and the  U.S.  housing mess, leading to at least 7-million foreclosures so far and millions of additional home foreclosures and bank assisted short sales expected in coming years.

“I am pleased we have reached a settlement agreement with Bear Stearns and other defendants in this matter,” said Michigan State Treasurer Andy Dillon. “Through this settlement process, the state has demonstrated its obligation not only to thousands of employees, retirees, and their beneficiaries who depend on these pension funds for their retirement, but also to all class members.”

As part of the agreement, the firms agreed to pay $294.9 million to investors nationwide who bought Bear Stearns stock and other equity securities and options from December 14, 2006 to March 14, 2008.