Wallowing in pain from the financial crisis, its real estate markets bruised and battered Florida’s panhandle beaches are being struck by the gushing oil spill from the Louisiana BP oil well. Call it “the Snow Ball Effect” of this mighty economic, environmental and real estate catastrophe. 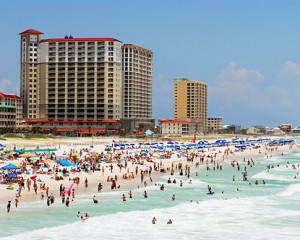 It’s a snow ball of extremes, and the combination threatens to devastate the Florida economy so dependent on tourism. The same is the case for the Gulf Coast along Louisiana, Alabama and Mississippi, already suffering from the oil spill, but Florida’s once booming tourism industry is in crisis mode at the start of its summer tourist season.

The multi-billion dollar Florida tourist business has more to lose than the other states, and its housing markets could suffer more than any other since even before the Great Depression.

People all over the Gulf Coast region wonder “what hell” is next. Hundreds of thousands flocked to the beach from Pensacola to Panama City along the Florida panhandle, as if they were going to the beach one last time. “I don’t think it will ever be the same in my life time,” said Jane, a woman in her 70’s near Destin, Florida known for being the jewel of the Gulf Coast for its white sandy beaches that sparkle like diamonds in the Florida sun. “The oil is so bad.” 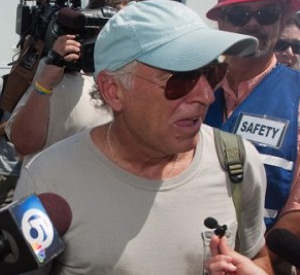 In Destin, vacation cancellations are piling up even before the oil hits its beaches. Globs of black tar precede the main oil slick in Pensacola and as far east as Okaloosa Island in Fort Walton Beach, where vacation bookings for later this summer are almost non-existent. Ocean tourism along the sandy white beaches of the panhandle accounts for an estimated $8-billion a year of the state economy.

But only globs of oil are reaching the beaches so far as the oil slick remains offshore, and may be caught up in the Gulf Stream, pushing the slick by Florida and around its peninsula into the Atlantic Ocean.

More than 84.2 million visitors spent $65 billion in Florida in 2008, according to Visit Florida, the state marketing unit. The massive oil spill could destroy an already fragile Florida economy, which was showing signs of stabilization.

The Florida housing market has been in an economic depression for more than three years, despite rising sales over the last year as a direct result of cheaper prices. Yet entertainer Jimmy Buffet, visiting Pensacola today remains optimistic. “The main thing is to not get the sky is falling attitude,” said Buffet, walking along the beach with the state’s governor, known for his happy-go-lucky song Margaritaville. “Everybody’s been through hurricanes for hundreds of years here.”

The optimistic attitude Buffet emotes may be something many can learn from. The TV images of birds dying, especially the Brown Pelican just taken off the endangered species list are graphic symbols of a society in agony. What many people fail to realize is that the rest of America has a huge number of similarities – be them environmental, political or in economic peril.

The people on the Gulf Coast are losing their employment, standard of living, hobbies, way of life and beaches in America’s biggest environmental disaster ever. And it’s all happening because as Gordon Gecko stated in the movie Wall Street “Greed is good.”

The BP oil disaster is a pivotal time for America, and it could spell disaster of the worst kind: FAILURE. When the snowball effect rolls down hill it’s hard to stop. Maybe it could melt away in the warm waters of the Gulf.