Superstar Brad Pitt has listed his spacious California beach house for sale, and judging from its  location the two time Academy Award nominee shouldn’t have much of a problem selling the massive estate even in the current market, as many Hollywood stars make this part of the Southern California coastline their second home.

The huge Malibu estate is on a hillside overlooking the blue waters of the Pacific Ocean and consists of two separate houses, a pool, tennis courts and private beach access.

According to Public records, Pitt purchased the Malibu property for $8.41 million in 2005. As an architecture buff, Pitt hired environmentally conscious designer Christopher R. Sorensen to design and construct extensive renovations which were completed in the last couple of years. The estate is currently listed at $13.75 million. 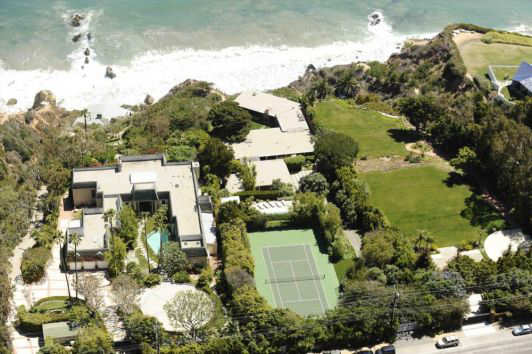 The Golden Globe winner began his acting career with many television appearances, including a repeating role in the old TV evening prime time soap opera Dallas. Pitt has been recognized for his dashing good looks and was once named People magazine’s best looking bachelor.

Pitt started his movie acting career in 1991 with a role in “Thelma and Louise” and went on to gain acclaim for appearances in many other roles. Pitt will follow his starring roles in “Inglourious Basterds” and “The Curious Case of Benjamin Button” in his new movie, “Moneyball” by playing Oakland A’s general manager and minority owner Billy Bean, which is set to premier on September 23rd.

When Pitt isn’t busy acting he’s busy working for a variety of causes, including helping the people of New Orleans rebuild their community from Hurricane Katrina.

The Pitt family, currently in Scotland while Brad films his new project “World War Z” have their main home in the East Hollywood Hills neighborhood of Los Feliz, which Brad spent more than a decade renovating. When not on location or in California, the family spends time at their home in the French Quarter of New Orleans or their chateau in the South of France.