Countrywide Home Mortgage has agreed to pay $600-million to investors in the largest settlement yet in the mortgage meltdown, but the settlement does nothing to answer a series of class action lawsuits filed against the company by mortgage holders. 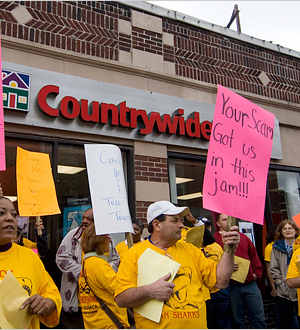 Countrywide was the nation’s largest mortgage company before encountering problems with its series of toxic mortgages that the company sold to subprime and adjustable rate mortgage buyers. It was purchased by Bank of America at the height of the financial crisis for what equaled pennies on the dollar compared to what company stock was worth before it nearly blew up the U.S.economy.

The company epitomized the country’s thirst for fast money with its “Fast and Easy” Liar Loans, in which applicants had to neither prove employment or just about anything else they put on a loan application. Hundreds of applicants interviewed by Housing Predictor over the years said that loan originators they worked with filled out their applications, and they merely signed them at property closings.

ARCHIVE: Read more at “Secrets of a Countrywide Insider”

The agreement for investors was preliminarily approved by U.S. District Judge Mariana Pfaelzer yesterday in Los Angeles, bringing an end to litigation brought by a series of stock holders damaged as a result of losing massive sums of money in Countrywide stock on Wall Street. Countrywide has agreed to pay $600-million for its part in the suit.

Its former accounting firm KPMG, which signed off on the company’s financial statements has agreed to pay an additional $24-million to settle additional claims. Neither company admitted any wrongdoing as part of the agreement. It was not disclosed how much of the proceeds would eventually go to stock shareholders and how much the government would take for settling the case, which is typical in these types of cases.

The accord apparently gives a slew of Countrywide executives a pass in the on-going SEC investigation of the failed troubled lender named in the lawsuit, who will not now have to fund payments to shareholders damaged in the Wall Street meltdown. They included former Countrywide chief executive and CEO Angelo Mozilo, former company president David Sambol, Chief Financial Officer Eric Sieracki and several ex-board members.

Mozilio still faces SEC charges of insider trading for profiting more than $300 from the company he started with a partner originally in New York City before moving it to California. The legacy of the former nation’s mortgage giant has suffered through a series of lawsuits brought by mortgage holders and stock holders, most of whom have never been compensated for any damages.

Bank of America, servicing Countrywide mortgages since the takeover in 2008 has one of the highest, if not the highest foreclosure rates in the U.S. and a series of lawsuits charge the company with profiting at the loss of homeowners trapped in the foreclosure crisis.

A lawsuit filed on behalf of a Texas non-profit group just last month is the latest in a massive series of charges against the company, blamed more than any other single U.S. business entity for the nation’s housing crisis. That case is still pending and like many others may soon be settled by B of A representatives handling the legal problems of Countrywide.