Two years after Housing Predictor was the first real estate research firm to forecast the foreclosure epidemic the crisis is caught up in a maze of bureaucratic red tape, squabbling in Congress and political turmoil. Since the crisis began bankers have made an estimated 5-million foreclosures, and it is only forecast to worsen in 2010.

Government efforts to remedy the crisis are being made with a flood of solutions from buying so-called toxic assets by the Treasury Department, which amount to buying securities that are mortgages that in most cases have been foreclosed to bailing out many of the nation’s largest lenders. 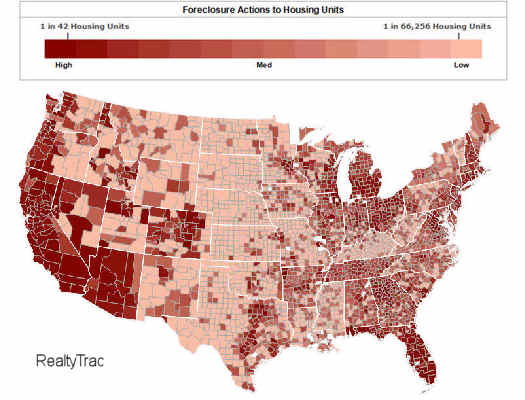 At least 10 major steps have been made by the Fed, Treasury Department and Congress, including a tax credit for first time home buyers. The credit was expanded to move-up buyers, but relatively few have been able to take advantage of the program since they are unable to sell their homes to purchase another.

Perhaps the most toxic aspect of the crisis is the enormous amount of money that Congress got from banking industry lobbyists.

Backed by the most powerful lobbyists in Washington, the banking industry and Wall Street firms donated $354.4-million to Congressional campaigns during the 2008 campaign, according to OpenSecrets.org, which tracks election campaign contributions on a regular basis. There are more than 11,000 registered lobbyists working in the capitol and only 535 members of Congress. The figure equates to 20.6 lobbyists for every Congress member.

Wall Street firms donated $154.9-million to Congressional candidates alone for the 2008 election. That’s $57-million more than the $98-million they gave in 2004, according to OpenSecrets.org. Special interests in real estate and the building trades donated another $136.7 million in 2008. Commercial banks contributed more than $37.1-million and hedge funds gave nearly another $17-million.

The donations seem to be paying-off as America pays for the crisis in economic pain with real unemployment in the area of 18%, including those that are no longer counted as being unemployed because their benefits have run out or they have given up looking for work all together.

The government program has been riddled with problems since its inception, and shows little promise of bringing an end to the crisis. More than 3.5-million homes are forecast to be foreclosed in 2010. The Obama administration is still depending on the good will of bankers, who got us into this mess to do the right thing and negotiate with mortgage holders to modify loans, despite the fact that bankers are only in the business of banking to reap huge profits. The Treasury Department says only 110,000 mortgages have been modified.

During the Great Depression President Franklin D. Roosevelt created the Home Owners Corporation to provide loans to people having trouble making their mortgage payments. A similar program is needed to aid homeowners at risk of foreclosure today. A Housing Predictor survey found that 1 in 6 homeowners are at fear of losing their homes. Studies show that 1 in 4 mortgages are under water. A third of all Americans with mortgages say they will walk away from homes if housing prices keep falling.

Growing outcries by the public and protests against members of Congress have failed to push lawmakers to enact any financial reform to regulate Wall Street practices and bankers, despite holding hearings in Washington, D.C. to produce a bill. At the height of the Great Depression it took Congress six years to enact the Glass-Seagall act, which produced the greatest financial reform the country had ever seen.

It took lobbyists working in concert with lawmakers 20 years to have the act repealed, triggering the largest financial disaster since the Great Depression. These days it takes the average bill seven years to become a law in Congress.