The bottom of the housing market will not develop in 2010 in the majority of U.S. markets as a result of high unemployment, the record plague of foreclosures and tight mortgage lending standards, prolonging the downturn as the economy struggles to recover.

The new assessment by Housing Predictor analysts was determined after a lengthy review of data gathered in the majority of housing markets forecast. Government failures, including Congress and the White House’s inability to legislate concrete steps to unwind the collapse in housing may prolong the downturn a number of additional years. 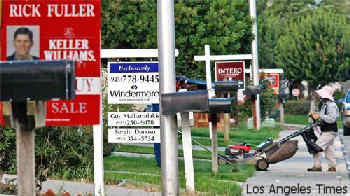 Divided by political agendas and apparently lacking the understanding of the depth of the financial crisis, members of Congress chose to battle along party lines rather than work in unison on a plan to help bring an end to the nation’s worst economic problem. The failures have sent the New York Stock Exchange on a downward spiral, fearing additional losses in financials.

As foreclosures rise in 2010, and banking losses increase the magnitude of the financial crisis will become more transparent, damaging the financial fortitude of many of the nation’s largest lenders, including troubled Bank of America cast in doubt after its takeover of Countrywide Mortgage. The plunge in the banking sector will make it that much more difficult to obtain a mortgage, pressuring home prices.

“A sustained economic recovery will not be possible until the financial sector’s functionality is restored and credit markets unclogged,” said the International Monetary Fund in a statement. “For this purpose new policy initiatives are needed to produce credible loan loss recognition, sort financial companies according to their medium run viability (likelihood for survival) and provide public support to viable institutions by injecting capital and carving out bad assets.”

The International Monetary Fund (IMF) is an organization of 186 countries, which works to foster global monetary cooperation and financial stability.

Accounting changes adopted by bankers and approved by Congress allow U.S. banks to only show losses on their balance sheets after foreclosed properties are sold, delaying the time a loss is made public for up to three years. The mark to market provision provides another way for bankers to shield losses from public transparency.

The U.S. economy shrank 2.4% in 2009, the worst performance since 1946. Foreclosures are forecast to top 3.5-million residential units by Housing Predictor in 2010 alone and top 17-million properties before the crisis abates.

“The dam will break and we’ll see a significant increase in foreclosures,” said Michael Lea, a professor of finance at San Diego State University. “The banks can’t continue to hope the economy starts growing.” Bankers have stock-piled cash to protect their institutions, holding billions of dollars back in proceeds to shield them from the rise in foreclosures and subsequent losses.

Unemployment is expected to remain high at or about 10% for the remainder of the year. The Federal Reserve has been purchasing mortgage-backed securities, but the program is scheduled to end March 31. However, the Fed will have to keep buying mortgage securities to keep the two largest insurers of home mortgages, Fannie Mae and Freddie Mac in business providing a mortgage market for banks, which sell the majority of their loans to the two government run enterprises.