It’s been almost three years since Housing Predictor forecast an economic depression in August, 2007 as a result of the real estate collapse and what we collectively called then a credit crisis. Nobel Laureate Paul Krugman is the latest to sound the bell, writing that we are in the beginning of another Great Depression. 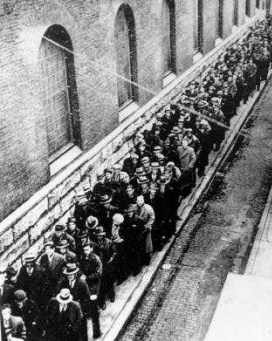 As America wakes up to the fact that this economy is in a long lasting downturn defined as an economic depression with high unemployment hitting 9.5% nationally, and “real” unemployment including those who have given up on looking for work that are not counted by the government much higher, adjustments are being made. Few businesses are hiring more workers and many of those that are, are located in colder less desirable climates.

People are scared of the words “economic depression” because they equate them to the Great Depression with the stock market crash in 1929, soup lines and the calamity that ensued. If you haven’t woken-up yet, the same sort of economic crisis is developing these days, but in a very different way as one might expect.

This is the new era of technology driven by high-tech and computers for all their good and all their faults. Computers of course aren’t perfect. They weren’t perfect in the “Flash crash” on Wall Street. They’re a lot like people, imperfect. So this economic depression is going to be unlike anything America has ever been through.

There have actually been six economic depressions since 1837 in the U.S. and each one was caused by an economic bubble except one. All five were triggered by a collapse in real estate coupled with banking failures.

People you never thought would lose their homes are losing them to foreclosure. Business and personal bankruptcies are up and will be for a long while. More people are on food stamps and receiving public aid than since the Great Depression. The unwinding of years of corruption on Wall Street, the banks and politicians will take years.

They’ll be plenty of ups and downs in the stock market and in the rest of the economy, and the simpletons, government leaders and sales types will be working overtime to spin a rosy picture around every corner.

Believe it or not, those of us that work and labor over Housing Predictor are cock-eyed optimists. We see the failings in government, the SEC, Congressional incompetence and all the rest, but we still see a country that has an amazing “will” of resilience and perhaps more than anything else a “strong will” to not only survive but flourish.

There’s also a huge movement that has finally awakened to what Lee Iacocca, the former Chrysler CEO, said: “Throw the bums out” of Washington, D.C. The apathy that somehow defines so much of this country might finally be awakening at election polls in November.

The very definition of an economic depression is lots of bank failures, long term business contraction and high unemployment. Today’s economy matches the definition. The housing market alone started declining in some areas five years ago.

Will Wall Street crash, you might ask? — Hard to say. We don’t forecast financial markets, only housing. Will housing prices go down more? Yes, in most places, not all.

How long will it last? As long as the government takes to join with small entrepreneurial business owners who made this country great to get more people back to work. That will remedy the housing mess along with the bull-dozing of tens of thousands of old dilapidated houses.

Barack Obama won the White House on a genius marketing platform of “Change.” When change didn’t come like a speeding freight train and suffering increased due to economic hardship, his poll figures turned south like the housing market. Obama isn’t a God or a magician. There will be more pain ahead.

Even Winston Churchill said eventually after messing things up America gets it right. WE can’t wait till then.