Besieged by Wall Street and banking irregularities more than three years after the financial crisis exploded on Wall Street, only a handful

of banking industry executives have been sentenced to prison in the fallout of the U.S. mortgage crisis that transformed the U.S. economy.

A New Jersey based mortgage company president was the first major banking executive to be sentenced to federal prison in the government’s efforts to target criminals in the wake of the financial crisis.

Michael J. McGrath, 47, of Montclair, New Jersey was sentenced to 14 years in prison for his role in orchestrating a scheme that bankrupted U.S. Mortgage Corporation and its subsidiary CU National Mortgage. The sentence was issued last March as a result of a massive conspiracy to defraud investors of more than $136-million.

Lee B. Farkas, 58, is one of the few other major bank executives to go to prison in the financial crisis. The former owner of one of the largest privately held U.S. mortgage lending companies and Colonial Bank, Farkas was sentenced to 30 years in federal prison and ordered to forfeit $38.5 million to the government for his part in a massive $2.9 billion scheme that drove his bank and mortgage company into failure. 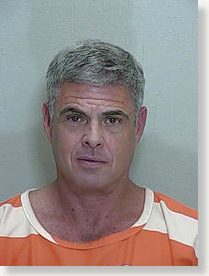 The former chairman of Taylor, Bean & Whitaker was convicted for being the master-mind in a criminal conspiracy that ran for at least seven years under his direction. Farkas was sentenced after being convicted on 14 felony counts by a jury in Virginia .

Greed led to Farkas’ down fall. Between early 2007 and August 2009 as the U.S. faced the worst financial crisis since the Great Depression, Farkas ran a scheme to rip off banks through the sale of fake mortgage assets by double and triple selling mortgages.

Farkas and six co-conspirators engaged in a scheme that netted them more than $1.4 billion from Colonial Bank’s Mortgage Warehouse Lending Division in Orlando, Florida and another $1.5 billion from Ocala Funding, a mortgage lending facility controlled by the firm. All six employees pled guilty as conspirators to bank fraud.

Former Countrywide Lending CEO Angelo Mozilo may be the most famous of all bank or mortgage executives. As the sun-tanned media face of the fallen mortgage company, Mozillo was troubled by his former company’s lending practices, especially problems that could arise from ALT-A adjustable rate mortgages, emails between Mozilo and former company employees’ show. The emails came to light during a federal investigation into the nation’s former giant mortgage lender. 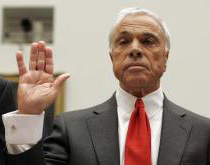 The former Countrywide Financial chief settled with the Securities and Exchange Commission agreeing to pay $67.5-million in fines on charges related to fraud and insider trading without admitting guilt late last year. No one else had come so far to fall so hard in the financial crisis.

Mozilo paid $22.5-million to settle charges after receiving $370-million in compensation for his work from the nation’s former mortgage giant over five years. The remaining $45-million was paid by Bank of America.

More than three years after purchasing Countrywide, Bank of America is still dealing with hundreds of thousands of foreclosures from Countrywide and is selling off assets and laying-off employees in an apparent attempt to stay in business.