Former Treasury Secretary Paul Volcker, now a special adviser to President Barrack Obama, says the mortgage industry is dysfunctional and is “a creature of the government” and “that it is the biggest single element missing from financial regulatory reform.” A partnership between mortgage lenders and homeowners at risk of foreclosure could hold the answer to solving the financial crisis.

Mortgage giants Freddie Mac and Fannie Mae may capture the pinnacle of the financial crisis, being bailed out with $148-billion in tax payer funds with more bail-outs needed to help repair the ailing mortgage market. 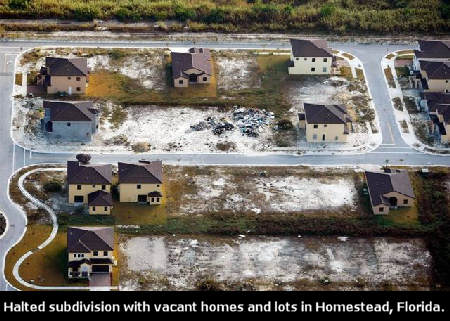 To put things in perspective, close to 4.6-million homeowners have suffered through foreclosure. Hundreds of thousands of people are homeless. At least 1.5 million spent a night in a shelter during 2009, while at least 2-million U.S. houses sit vacant.

One out of four US mortgages are underwater, meaning that the value of the property is lower than the mortgage against it. It is unlikely that house prices will escalate in the near future, though the projected escalation over a decade may look very different. The crucial factor is that a solution is found immediately to prevent further chaos.

How can this situation be solved?

William C. Wheaton, an economics professor at MIT (Massachusetts Institute of Technology) offers a solution. In the long term it acts as a positive investment program creating a potential win-win result for mortgage companies and troubled homeowners. Bankers would have to reduce the mortgage to current market value and re-issue a traditional mortgage at this value. The balance would be the responsibility of the mortgage company. This insures a portion of the loan is at least paid by the homeowner in monthly mortgage payments.

Upon sale the owner receives 40% net profit over the loan amount. Simply put the current mortgage amount splits between the resalable value of the property and the amount loaned on it. For instance a mortgage of $100,000 set on a property valued in today’s market at $60,000 would be divided thus: the $60,000 would be treated as a traditional mortgage, and a claim of 50% of the future appreciation capped at $40,000.

Meaning, that should the house sell for $90,000, the owner would have to pay a further $15,000 from the sale funds. In a market where prices rise, the lenders stand to gain a lot creating a large profit for the lender and a little for the borrower.

This kind of restructuring has proven successful in the past and may prove the answer going forward. As early as the 1980’s Urban Development and the Department of Housing suggested “Shared appreciation.” In 1990 International and US agencies created the “Brady Bonds.” This would certainly bring relief to millions of people, insuring their future and place them in a position of some comfort.