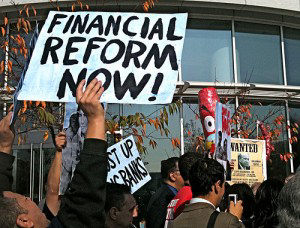 The extension was announced one-day before time ran out for the government to consider changes offered by dozens of special-interest groups trying to sway Congress’ decision making on new Dodd-Frank financial reform rulemaking.

The decision to delay the comment period was quietly announced in a news release issued by the Federal Housing Finance Agency on their website Thursday. The organization was started chiefly by the Obama administration to oversee troubled mortgage giants Freddie Mac and Fannie Mae.

The decisions involved relate to what down payments will be required to obtain government backed mortgages, the percentage of loans lenders’ will be forced to retain in their portfolio and a rule to establish margin and capital requirements on financial dealers before mortgage securities are bought or sold.

The extension was jointly issued by the Federal Reserve Board, the Farm Credit Administration, the Federal Deposit Insurance Corporation, the Federal Housing Finance Agency and the Office of the Comptroller of the Currency. The comment period was extended to July 11, 2011.

Bankers say that prospects for accelerating growth are growing dim as a result of downward revisions of economic growth and slowdowns across a wide set of economic verticals. Weakness in manufacturing, consumer spending, high unemployment and a sluggish housing market led Fannie Mae to downgrade prospects for economic growth in 2011 to just 2.5%, down a full percentage point from their initial forecast issued at the beginning of the year.

“Ultimately, the labor market holds the key to a housing recovery, but job growth is needed in order to activate housing demand,” said Fannie Mae Chief Economist Doug Duncan. “Hiring delays will continue to push out timing for the housing rebound.”

A huge majority of 326 members of Congress signed letters sent to the government agencies urging regulators working on proposals to take the time they need to review and make recommendations on the changes to be proposed. Joint letters from 44 Senators and 282 members of the House of Representatives were released to the media.

The proposals are part of risk retention regulations required by the Dodd-Frank Act, which was started to be implemented last year. Risk retention provisions require issuers of mortgage-backed securities to retain a portion of the risk, one of the largest causes of the financial crisis.