There is more federally assisted housing in New Orleans five years after Hurricane Katrina struck than before the storm, yet the population of the Greater New Orleans area has been cut in half, according to a new report. Some 38,000 households still have no place to call home. The New Orleans metropolitan area lost 75,000 homes as a result of the storm. Only 10,000 have been rebuilt.

Based on interviews with residents of about 3,000 housing units, the Housing and Urban Development Department (HUD) estimates the area has lost 13% of its housing stock, and that five years after the disaster 38,000 residents still consider themselves “in flux ” between permanent residences. The survey paints a disturbing picture of a community damaged in the wake of Hurricane Katrina five years after it was flooded, forcing 80% of its residents to initially flee. 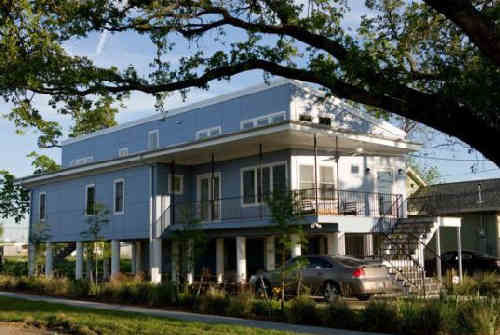 Data gathered from the region’s seven major parishes, including Jefferson, Orleans, Plaquemines, St. Bernard and St. Charles shows that some communities have seen business growth and prosperous times like in the French Quarter, where more than 300 new restaurants have opened joining some 816 eateries prior to the storm. Government efforts helped build 8,400 new homes in the community with the help of actor Brad Pitt, who spearheaded a project to build new homes for residents whose homes were destroyed in the storm.

Despite the over-whelming loss in housing structures, New Orleans has also become a more expensive place to live. The monthly cost of housing has risen by nearly 33%, according to HUD. The increase is in sharp contrast to housing costs in most other areas of the nation, which has dropped by more than 35% on average in the same period as a result of the real estate crash.

“The numbers also offer clear evidence of where things stood in 2009, providing a benchmark for the Obama administration’s work to help New Orleans recover and rebuild,” said HUD Secretary Shaun Donovan. HUD also found that 298,000 households were forced from their homes for at least two weeks after the storm, and most families moved twice or three times following Katrina with some moving as many as ten times.

Of some 252,000 owner-occupied housing units that sustained damage during Hurricane Katrina, 90% have undergone repair through private insurance payouts, federal flood insurance or homeowner assistance grants provided through a state program funded by the federal government. More than half or 52% of all homeowners reoccupied their homes, while 25% were so distraught by government delays that they moved back into their damaged homes before repairs were made.