The halt of the National Flood Insurance Program (NFIP) is having a ripple effect on real estate home buyers, mortgage lenders and real estate agents endangering the housing market, still suffering from a downturn in many areas of the country. 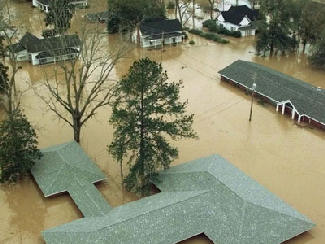 The National Association of Mutual Insurance Companies estimates that about 1,200 home closings are being delayed each day as a result of the lapse in flood insurance policies being issued. Mortgage lenders will not allow closings on homes that require flood insurance until the program is reinstated.

The House of Representatives approved a bill that would extend coverage through the end of September, which is now with the Senate awaiting final approval. “I urge the Senate to act swiftly to renew this program and ensure that anyone living in a flood plain has the protection they need,” said Representative Jack Kingston (R-GA). “We cannot allow this important program to be caught in a game of carrot and stick politics. Without renewing it, Congress will leave the American economy vulnerable to a body blow it cannot afford.”

The hold-up is not an issue with the flood insurance program causing the delay, but partisan disagreement over business tax cuts and social spending programs that are part of the bill. Concern in the Senate among Republican Party leaders over the nation’s growing debt crisis has led to the bill being held up for more than eight weeks.

It’s the third time the National Flood Insurance Program has been allowed to lapse this year alone because Congress has only been willing to approve short-term extensions of the program until reforms can be made–a time-consuming process that has been discussed since the devastation of Hurricane Katrina five years ago.

“This vote provides a near-term solution, but we need to find a way to free this important program from the legislative logjam,” said Kingston. “Until we do so, we leave ourselves vulnerable to devastating storm damage and uncertainty in the market.”

An active tropical storm season is already underway with the development of Tropical Storm Alex in the Gulf of Mexico, threatening clean-up operations in the massive oil slick that developed following the explosion of the Deepwater Horizon vessel off Louisiana.

The National Oceanic and Atmospheric Administration (NOAA) estimates there will be between 14 and 23 named tropical storms this year, three to seven of which could strengthen into at least category 3 hurricanes.

Homeowners who are currently covered under the federal program will not lose coverage because of the lapse in writing coverage, but they will not be able to amend policies until the program is reinstated. Those who are feeling the biggest impact are homebuyers who are trying to complete purchases on homes in a flood plain and aren’t able to do so with a mortgage without flood insurance.

Of particular concern are homebuyers who purchased homes under the federal governments’ homebuyer tax credit program. If closings are not finalized by June 30, they may lose the $8,000 tax credit.

When the program is reinstated, mortgage experts expect that the government will retroactively approve applications dated back to June 1, but there will still be a 30-day waiting period before coverage goes into effect. To lessen the impact of the waiting period, homebuyers should apply as soon as possible–even as the program sits in limbo awaiting Congressional action.