Pensacola, Florida – As oil began to wash ashore from the BP oil slick in Pensacola, demonstrators gathered at a BP gas station in Pensacola Sunday, and at the beach down the coast in Navarre to protest against the oil giant for not bringing an end to the massive Louisiana oil spill before the slick reached Florida. 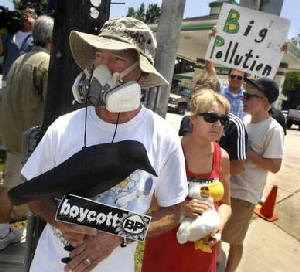 Oil is still washing up in tar balls along the Florida Gulf Coast, but the National Oceanic Atmospheric Administration (NOAA) forecast calls for the slick to move eastward, bringing oil to the Destin area and as far east as Panama City Beach Monday.

A massive clean-up effort has been launched by BP oil, and crews are already cleaning up globs of oil on Pensacola beach. But a large slick hitting the beaches along Florida’s pristine white sandy panhandle could bring an early end to the tourist season, which has just kicked off.

Damage would also come in the form of jeopardizing the state’s housing market, already battered by the economy and the real estate crash. Values of homes and condos could decline by an additional 30% if the spill devastates the state economy, especially along the waterfront where tourism is the top industry. 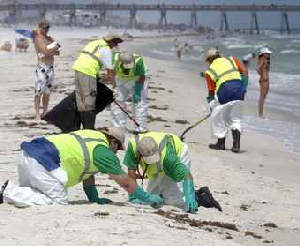 “I don’t think kids should be out here,” said Christi Thomas, a tourist enjoying a day in the sun at Fort Pickens beach. “I’ve heard people have stepped in it and didn’t know what it was. They just have oil all over their feet.”

The amount of oil to hit the beaches along Florida’s panhandle has been limited to only small globs so far, and tourist traffic in Pensacola seems to be down from previous busy weekends. But tourists were busy enjoying the beach in Destin and Panama City Beach, where the beaches were crowded.

If the history of oil spills means anything along coastal areas, some spills have damaged coastlines heavily with thick coats of oil, and only spotty patches of tar elsewhere along the coast. That was the case in  Santa Barbara,  California in the late 1960’s when some areas of the state’s central coast were coated in thick black oil, and others only saw globs of tar wash ashore.

The gulf coast oil spill is already the worst U.S. environmental disaster in history, and a huge surge of oil hitting Florida’s beaches could send the strongest gulf coast economy into ruin. Florida’s tourist economy accounts for $65-billion in annual proceeds, by far the biggest on the gulf coast.

The man made environmental disaster is the largest to ever threaten the Sunshine State, despite a series of hurricanes to hit the gulf coast region over a two year span beginning five years ago. The storms included Hurricane Katrina, which devastated the Louisiana area around New Orleans.

“This is a siege across the entire Gulf,” U.S. Coast Guard Admiral Thad Allen said on CBS’s “Face the Nation” Sunday. “There will be oil out there for months to come. This will be well into the fall.”

Shifting weather patterns, including a series of unusual spring time thunderstorms are popping up along the region, pushing the massive oil slick closer to the coasts of Mississippi and Alabama. Scientists aren’t sure whether the rare storms are related to the toxic oil spill, and the huge volume of oil that has blacked the Gulf of Mexico.

Oil spewing from the massive oil leak 42 miles off of Louisiana has already inundated 140 miles of shoreline in Louisiana, Alabama and Mississippi. The Louisiana Delta region has been blacked with sledge from the oil leak, killing hundreds of birds, fish and other wild species native to the area.