Homes along the immediate path of the Gulf Coast oil leak are forecast to decline at least 30% in value as a result of the environmental catastrophe produced by British Petroleum’s gushing oil well 42-miles off of Louisiana, according to a new forecast by Housing Predictor. 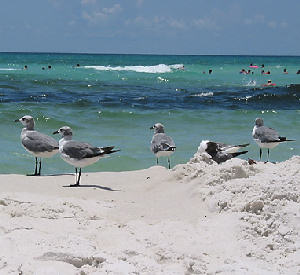 The forecast is being issued after more than a month of research and monitoring the impact of the oil leak, which has poisoned the eco-system along the marshes of the Louisiana coast line and as far east as Alabama. Housing analysts contend that the projected losses in housing value will top that of any oil disaster in the nation’s history and will send tens of thousands of additional homes into foreclosure as a result.

The forecast covers the states of Louisiana and Mississippi, and does not yet include other states along the Gulf coastline. The projection includes immediate waterfront properties and will be updated as the direction of the massive oil blob becomes more definitive.

The area is also the most densely populated to be struck by an oil disaster since the 1960’s oil leak in the U.S. along the Pacific coastline near Santa Barbara, California. The Gulf Coast has seen an incredible increase in population in recent years. The beautiful white sandy beaches in Florida may be devastated by the toxic BP oil catastrophe, presenting an economic and environmental disaster of epic proportions, devastating an already fragile housing market.

The Gulf Coast has been heavily impacted by the nation’s housing crisis with homes and condominiums along most of the immediate coastline deflating an average of 65% from the markets peak during the real estate boom. The forecast 30% in additional declines from current levels in housing values is for the immediate vicinity of the current oil leak, including areas of Louisiana and neighboring Mississippi, expected to be heavily impacted by the disaster.

The Gulf Coast is one of the country’s largest second home vacation markets with millions of waterfront condominium units, many of which were built and sold during the boom, including developments in Alabama and Florida. Oil from the gushing BP well has not yet reached the Florida panhandle, but local residents are worried about the strong possibility of it reaching their beaches.

Should BP oil blacken the beaches of Florida’s coastline, the environmental impact and long term economic pain for the area is projected to run into the billions of dollars since Florida is so dependent on the tourist industry. Losses are expected to be in the billions of dollars alone for the $40-billion summer tourist season with hotel operators already reporting cancellations of up to 70% for summer bookings, and the oil has not yet even come close to the Sunshine State’s white sandy beaches.

The area has suffered through a series of natural disasters, including Hurricane Katrina, which struck New Orleans five years ago this summer. Rebuilding efforts have been slow along the coastlines of Louisiana and Mississippi, which were devastated by the storm. 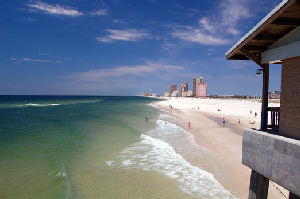 In Biloxi, Mississippi oil has already killed dozens of sea turtles, but not yet fully blackened the beaches in the delta region. Only a light sheen of oil has made its way to Biloxi as the Gulf Coast ocean currents move south-west keeping most of the oil at bay.

The Biloxi area has been the focus of a federal program to help rebuild the community after Hurricane Katrina wiped out its coastline developments. Rebuilding efforts could fall into jeopardy if oil reaches the area and that of Alabama on a massive scale.

Real estate values would also be seriously impacted in Florida and Alabama if the oil reaches the beaches and has a strong likelihood of crippling local economies, sending more homes and other properties into foreclosure.