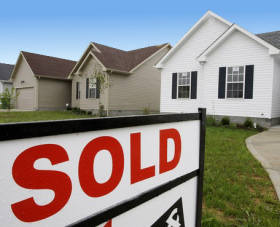 The increase in sales of single family homes, condos and townhouses pushed the associations heavily watched annual sales volume rate to more than 1-million units above last years pace, indicating the housing market is pulling out of the downturn. However, the figures represent sales of properties only sold by Realtors and does not include an estimated 15% to 20% of other homes sold by private parties, directly by banks and properties sold through most auction companies, which are a rising sector of the housing market.

The upswing in sales was expected as a result of federal tax credit incentives, which expired May 1 st. However, the inventory of homes listed for sale during the month rose 11.5% to 4.04 million units, representing a 8.4-month supply, according to NAR.

The increase essentially blocks the housing market from establishing a bottom to the market as homeowners who are trying to sell their homes add to the already bloated inventory of homes for sale. The inventory is just 2.7% above year ago levels, and is below the record inventory of 4.58 million in July 2008.

A surplus of homes making up a shadow inventory of properties that have not yet been marketed by bankers and bank servicing companies also trouble housing markets. The inventory is composed of homes that are in the foreclosure process or have already been foreclosed. The U.S. Census Bureau estimates 19.2-million homes in America are vacant, millions of which have been abandoned by their owners and have not yet been formally foreclosed.

Home prices in many of the nation’s most severely affected markets are rising, including California, Michigan and Ohio. But home values in the majority of markets are projected to decline through the remainder of the year by Housing Predictor analysts as markets move towards a balance.

Lower home prices and low mortgage rates continue to drive an increase in home sales, despite the expiration of federal tax credits in many areas of the country.

“It looks like the level of home sales that close in May and June will stay elevated, but many buyers remain in the market even without the tax credit,” said NAR President Vicki Cox Golder. “Some Realtors tell us they are very busy with clients who are entering the market now as a result of improved conditions.”