It’s that time of year again, when we drag out the lights and tinsel to show just how much we appreciate the holidays. But for 60-million Americans who live in shared homeowner associations, arguments about religious decorations can make the season a lot less festive.

Homeowner associations or shared ownership community documents often restrict decorations and signs, and these restrictions carry over into the holidays. For example, one community in 2008 cited their rules against signage when banning all holiday decorations and lights, much to the distress of the mostly unaware residents. And a federal court recently ruled that religious objects could be barred from doorframes by a condominium’s documents unless it could be demonstrated that the condo was intentionally discriminating against the owner. So before you hang your wreath and plug in those twinkly lights, here’s a few things to consider: 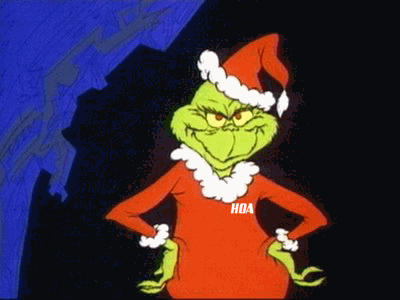 Photo Courtsey of The Cartoon Network.

While you may own your home, if you live in an SOC you agreed to a complex set of rules and regulations when you signed on the dotted line. If you don’t have a copy of the association’s rules, make sure you get one and give it a thorough read. It’s extremely common for condos, co-ops and HOAs to have rules that regulate decorations and lights, especially when those decorations are placed in common areas (like hallways).

Some of these rules are designed to keep the property looking neat and tidy, but some may address safety concerns, and every association has different policies concerning how strictly they enforce decoration rules around the holidays. There are many more community associations in the US than municipal governments, and each association (run by an elected board of volunteer owners) will generally determine just how flashy the holiday decorations can be.

2- Decorations are Religious, But Association May Still Have the Right to Ban Them

In the United States, the Constitution guarantees that the government will not prevent us from freely expressing our religious beliefs. But community associations are not governments–they are private corporations run by homeowners. Federal courts have ruled that freedom of religion does not extend to these organizations.

In response, some states have passed their own laws that guarantee the right of owners to place religious symbols on their doors or mantles. However these laws usually have small items in mind, like crosses or mezuzahs, and they may not guarantee that you can place any kind of holiday decorations on your door. Not to mention that non-religious decorations, such as strings of lights, are generally never protected. So even though you may be celebrating a religious holiday, “freedom of religion” may not apply.

3- Board Members are Your Neighbors–So Try Being Neighborly

They may seem like evil-doers, but remember that board members of homeowner associations are volunteers who are doing an extremely difficult, thankless job for your community, and they’re still your neighbors. So if you’re worried about decoration rules for the upcoming holiday, start with a friendly call instead of an angry letter. If that doesn’t work you may have a legal right to put an item on the agenda for the next board meeting and have it discussed in public so that the entire community can give their opinion.

Sometimes, you may find that there are good reasons for a restriction that seemed unreasonable. For example, many cities have laws that regulate lights that might disturb native wildlife. Other times simply talking about an issue can convince board members to ease up on a restriction that initially seemed like a good idea. If you’re polite and make reasonable arguments, you might just change their minds. If that doesn’t work, try calling the local newspaper or television station–even the most recalcitrant boards will generally not want to fight a messy, public battle around the holidays.

It’s all well and good to argue for unrestricted expression of your holiday cheer, but remember that rules are universal, and if it works for you it has to work for everyone, regardless of their religion, philosophy or upbringing. That is, you can’t say that you want the right to decorate your home however you want and then get angry when your neighbor puts out his or her own decorations that you might find indecorous.

Modern SOCs are multiethnic and multicultural, and part of being a good neighbor is respecting that everyone has the right to celebrate their own holiday. So you can’t fight for your right to display a 12-foot menorah (Jewish candelabra) and then balk at your neighbor’s towering inflatable Christmas tree. What’s good for one neighbor is good for another. It may be hard to accept, but sometimes a little regulation may not be the worst thing in the world.

Ryan Poliakoff is the co-author of New Neighborhoods: The Consumer’s Guide to Condominium, Co-Op and HOA Living, and Vice President of The Ocean Palms Association, Inc. For more information, please visit www.newneighborhoodspublishing.com.