Mortgage rates declined seven-one-hundredths of one percent this week to hover near the record low at an average of 4.72% on a 30 year fixed rate mortgage, while the number of home buyers applying for mortgages also dropped. It is unlikely rates will get lower any time soon. 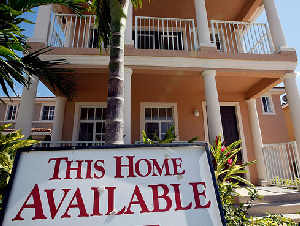 The number of homeowners applying to refinance their homes fell modestly, however, according to the Mortgage Bankers Association. The drop of only 1.6% in refinance applications may not yet be a significant change from the upward trend of refinancing in recent weeks.

The long trend of low mortgage rates, which has lasted more than a year as the Fed keeps its borrowing rate at or near 0% is part of government efforts to re-energize home sales.

“Purchase applications are now 35% below their level of four weeks ago, as homebuyers have not yet returned to the market following the expiration of the homebuyer tax credit at the end of April,” MBA’s chief economist Michael Fratantoni said. “Although rates remained essentially flat, refinance applications dropped this past week for the first time in a month.”

A large number of homeowners have already refinanced mortgages or are unable to do so as a result of being upside down on their loans. Some homeowners have also lost their jobs, which makes it difficult to refinance without government help.

Adjustable rate mortgages declined just .02% to 3.92% for the week. The rate has shown little change in recent weeks, but averaged 5.04% a year ago. The 1-year ARM hasn’t been lower since May 2004 for four consecutive weeks when it averaged 3.87%, driving many mortgage buyers to purchase more home than they could actually afford.

Unemployment rates in especially hard hithousing markets scattered throughout the nation, including areas of California, Florida, Michigan and Ohio has topped 21% and is critical to the real estate market. Only 41,000 non-government jobs were added for the week.