much of the U.S. The rate on a 30-year fixed rate mortgage fell to 4.80%, a tumble of 0.11 for the week after four straight weeks of rate increases.

Rates on a 15-year fixed mortgage also dropped to an average of 4.02% with 0.7 point on the seldom purchased loan from last week when it was 4.13%, according to Freddie Mac. A year ago both the 30 and 15-year mortgages were much higher.

Mortgage applications rose 5.3% from the previous week, according to the Mortgage Bankers Association. The seasonally adjusted purchase index rose 10% to the highest level since early last December. Refinances, however, decreased for the week to 58.5% of application activity from 60.3% a week earlier as the number of homeowners who qualify for refinancing tumbles. 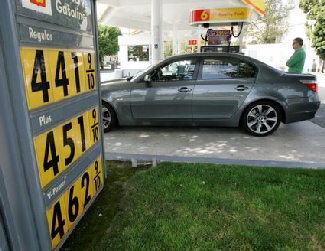 However, the prices on gasoline and groceries continue to show measured increases that are not counted by the core consumer price index, indicating that despite government figures costs of goods and services consumers pay for are rising with higher gas costs. New homebuilders also showed more pessimism during the month of April, according to the National Association of Homebuilders index.

“The housing market continues to struggle,” said Freddie Mac chief economist Frank Nothaft. “Although housing starts and existing home sales in March were stronger than the market consensus, they were still at low levels.”