By Mike Colpitts
As it roars toward the Gulf Coast to make landfall forecast to turn into a hurricane, tropical storm Isaac poses more than $36 billion in financial losses to the Gulf Coast, according to a 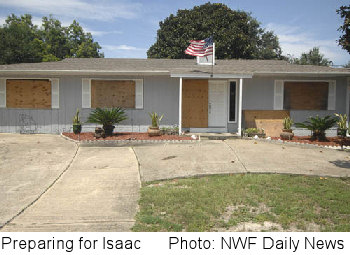 An estimated 269,081 homes and other residential properties in just seven major metropolitan areas along the Gulf Coast could be at risk from the powerful storm, an analysis from CoreLogic showed.

Nearby Pascagoula, Mississippi, which was heavily devastated by Katrina, poses the second greatest threat of damage from the massive storm, which is building in intensity as it makes its way across the Gulf of Mexico for an expected landfall late Tuesday night or early Wednesday morning. CoreLogic analysis shows that $1.2-billion in property is at risk.

Biloxi, Mississippi, which had been the second largest gambling Mecca in the U.S. to Las Vegas prior to Hurricane Katrina is estimated to risk more than $773-million in property damage from the storm. Most of the region’s buildings were leveled by the furry of Katrina. Since that time rebuilding has been slow except for casinos and a handful of other businesses related to the tourist industry.

Other areas at risk from storm surge along the Gulf Coast include Destin, located in the Florida panhandle and Fort Walton Beach, especially Okaloosa Island which stretches along the gulf and is prone to suffer from hurricane damage.

Mobile, Alabama is also apt to sustain residential property damage from the strong winds and tides driven by the growing storm, especially along its coastline.