By Mike Colpitts
More than 1.5 million U.S. homeowners over the age of 50 lost their homes to foreclosure as a result of banks and Wall Street developing 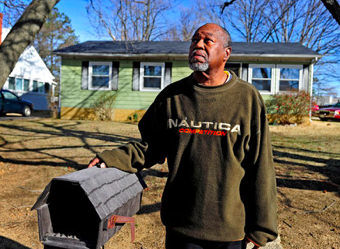 the mortgage crisis, according to a study by the American Association of Retired Persons (AARP). The study surveyed mortgage loan data for 2007 through 2011.

The study also found a serious increase in older homeowners in major jeopardy of losing their homes to foreclosure in the future. Mortgages 90 days or more delinquent increased from 1.1% in 2007 to 6.0% at the end of December 2011 for homeowners over the age of 50.

Millions of these homeowners are in serious jeopardy, and least likely to purchase a home in the future with dwindling incomes. More than 600,000 mortgages held by older mortgage holders were in foreclosure at the end of the year, and another 625,000 three months or more late.

“The collapse of the housing market has been especially painful for older homeowners,” said Debra Whitman, AARP vice president for policy. “Older homeowners often rely on their home equity to finance their needs in retirement, things like health care, home maintenance and other unexpected needs. The fact that so many older Americans have no equity at all is troubling.”

As the U.S. housing market inflated in value during the bubble years more homeowners took out larger mortgages, leaving heavier debt burdens for older Americans. Serious delinquency rates are lower for those under 50 years of age since employers are more likely to hire younger workers because they can pay them lower salaries.

The younger sect is able to pay down their mortgages more rapidly, especially with the increase in 15-year fixed rate loans. The AARP study also found that seniors over the age of 75 have a higher foreclosure rate (3.2%) than those between 50 and 64 years of age (3.0%) and those 65 to 74 (2.6%).

Foreclosure rates on subprime loans were the highest for Hispanic borrowers age 50 and higher than any other race, 14.1%. Asians were second at 13.9%, followed by whites (12.8%) and African Americans (11.5%).