in an effort to protect itself from legal problems in the growing foreclosure crisis. Mortgage Electronic Registration Systems (MERS) has issued a new policy on its website advising members not to foreclose or start legal proceedings in bankruptcy courts in the name of the company.

The change comes after Attorneys General for at least three states, including Massachusetts and New York voiced concerns about a possible agreement with the nation’s largest five banks over errors made in the robo signing scandal. Employees admitted to signing thousands of signatures in mass to legal documents that led to the foreclosure of homes in dozens of U.S. states without first confirming the information as being true.

The change represents a major turn of direction for the company, which has recorded about 32 million mortgages in county recorder offices throughout the U.S.

All 50 state Attorneys General are investigating the activities stemming from the admissions made under oath regarding the illegal signing of documents that allowed the foreclosures to proceed. The move represents a huge difference from where the company stood prior to the robo signing controversy.

MERS is the target of thousands, and perhaps eventually millions of lawsuits over its foreclosure processes related to the electronic recording of documents in counties all over the U.S. to finalize foreclosures. Attorneys are challenging the legality of MERS standing in some foreclosure cases, which lack the original Deed of Trust paperwork in order to obtain the legal compliance to foreclose.

In a statement dated earlier this week, July 26th MERS website reads, “No foreclosure proceeding may be initiated in the name of Mortgage Electronic Registration Systems, Inc. (MERS). No Legal Proceedings in a bankruptcy may be filed in the name of MERS.” 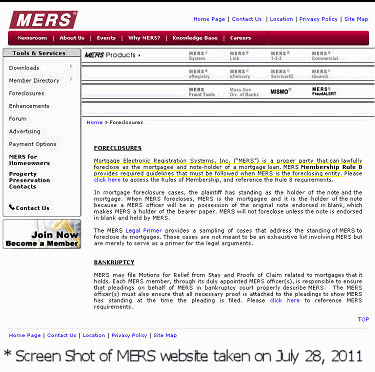 which has apparently been part of the company site for years it reads: “Mortgage Electronic Registration Systems, Inc. (“MERS”) is a proper party that can lawfully foreclose as the mortgagee and note-holder of a mortgage loan. MERS Membership Rule 8 provides required guidelines that must be followed when MERS is the foreclosing entity.