for violating the Fair Housing Act for allegedly discriminating against women on paid maternity leave.

The suit was filed in U.S. District Court in the Western District of Pennsylvania against the mortgage insurer and two of its underwriters, Elgina Cunningham and Kelly Kane. The suit alleges that MGIC required women on paid maternity leave to return to work before the company would insure their mortgages.

“It defies belief that in 2011 any institution would discriminate against a mother for legally and properly taking leave after the birth of a child,” said U.S. Attorney for the Western District of Pennsylvania David Hickton. “My office will not stand idly by while parents suffer discrimination in lending simply for taking maternity or paternity leave.”

Conventional mortgage lenders typically require applicants for home loans with less than 20% down payments to obtain mortgage insurance to insure the loan for investors. Denials to provide mortgages to women who were either in the process of giving birth or after having given birth on maternity leave could cost many women the opportunity to obtain mortgages. 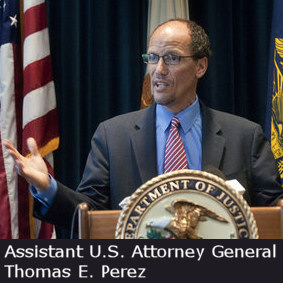 “No woman should be denied the opportunity to receive a mortgage loan simply because she has just given birth,” said Thomas Perez, assistant attorney general for the Justice Department’s civil rights division. “Our nation’s fair housing laws prohibit this kind of discrimination, and the Justice Department is committed to aggressive enforcement of those laws.”

The lawsuit resulted from a complaint filed with the U.S. Department of Housing and Urban Development (HUD) by a mortgage applicant. The suit alleges that a woman in the Wexford, Pennsylvania area trying to obtain a mortgage was discriminated against in the course of obtaining a home loan.