Nervousness and uncertainty send jitters through the community of Titusville, the Florida home to the U.S. Space Shuttle program for more than 30 years. 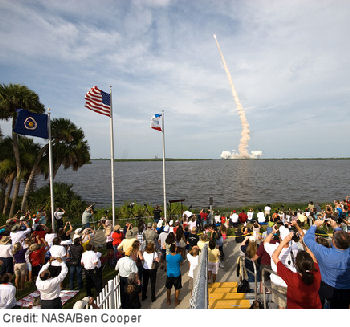 Ronald Reagan was president of the United States when this community led the venture into outer space. But the hub for space science exploration is ending its presence in the nation’s movement into space with the final launch of the Space Shuttle.

Some 7,000 NASA workers will be let go as a result of the end of the program. Another 15,000 to 20,000 employees with associated companies will lose their jobs in the region. Most have not found work else where in this awful economy, and many worry about how they will make mortgage payments and pay other bills.

The end of an era of space exploration for the U.S. is expected to transform to private companies, already underway to provide private exploration into space. But many of the same workers will not be accepted as welcome by the employers having worked for the government in many cases, for more than a quarter of a century.

Florida has suffered through the tolls of the real estate crash as one of the worst victims of bankers’ and stock market traders’ greed in the financial crisis. But the untold pain that may result from Titusville, which has a population of only 44,756 losing the Space Shuttle program, is only beginning to unfold.

When word of the Space Shuttle program ending hit more than two years ago, homes were listed for sale at a rapid clip as some workers tried to get an early start on the market. But in the housing market crash in Florida few have had any luck. Many NASA workers are expected to walk away from homes with upside down mortgages in Titusville, upending a housing market that is already wallowing in pain.

Titusville may soon be akin to other areas of the country that have suffered through enormous employer losses like areas of South Carolina, where communities once sheltered the garment and textile industries. In that case, out-sourcing became cheaper for corporations to manufacture products and reap greater profits. 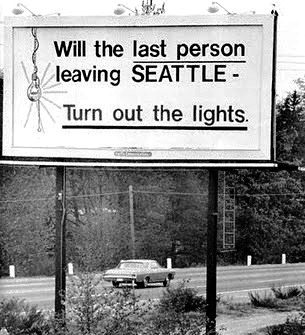 The same events led to the demise of the steel industry in Pennsylvania, Ohio and parts of other states in the steel belt like northern Indiana. States that retained new or creative leadership lived up to the challenge and re-designed through federal urban renewal projects and re-developed themselves and their communities. Others that did not live a sort of dying existence in the new America today and remain scattered wrecks of their former selves.

Which way Titusville selects to go is still an open question, but Florida’s history lacks political drive to aid its communities with tax payer government backing since it has no state taxes. When Seattle’s largest employer air-space giant Boeing cut more than 60,000 jobs in 1971, a billboard on the edge of town read, “ Will the last person leaving Seattle turn out the lights. ”