Buffeted by high unemployment and weak consumer sentiment, housing markets are encountering sluggish home sales in the midst of what is typically the busiest home

buying season of the year. Home sales should see an improvement towards the end of summer, but the average US home is projected to decline 7.1% in value in 2011, a major downgrade since earlier this year.

The U S is on the verge of another decline in real estate.

The updated Housing Predictor national forecast reflects a greater national decline in home values for the year. The forecast issued early in the year was a lesser 4.8% average. But especially hard hit areas in the U S including California, Florida, Nevada, Arizona, Michigan and other states have encountered a growing inventory of vacant properties that aren’t yet in the foreclosure process, and have been left for lenders’ to formally repossess.

Homeowners in many areas that weren’t as seriously affected by the fall-out are walking away from mortgages in greater numbers as a result of being in negative equity. Lender Processing Services, a real estate research supplier to the mortgage industry reports 30% of mortgages are in negative equity. Some 35% of upside down mortgages have Loan-To-Value ratios of more than 150%. 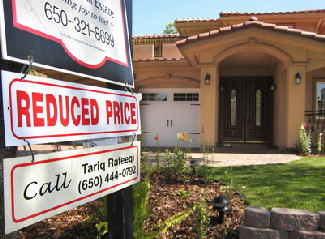 Hard hit areas of the west and south are undergoing massive deflation in home values with another wave of record high foreclosures expected shortly as lenders release the inventory on to the market halting any sort of real recovery from developing.

Growing unemployment, which reached 9.2% according to official government figures released Friday with much higher joblessness in many regions leave business conditions weak in many sectors, companies hording cash and refusing to hire workers. The broader measure of unemployment, including under-employed ranges some where between 20% and 25% or close to being as high as the Great Depression.

Conversely, declining home values in the over whelming majority of the US also tightens mortgage lending further by lenders, who are already uneasy to make loans in many cases as a result of the loss in home values.

Record foreclosures and government programs that have helped only a small percentage of homeowners at risk of foreclosure are pressuring home prices and stalling a recovery from developing as a shadow inventory of at least 4 million homes, perhaps as many as 6 million properties lingers over a housing recovery.