Homes in negative equity or with mortgages that are higher than the property’s current market value declined in the first quarter of 2011, 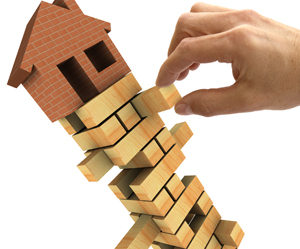 according to a leading real estate research firm. Residential properties were down slightly from 11.1 million homes or more than 23% of properties in the prior quarter.

The drop in negative equity demonstrates a strengthening factor for the housing market of about 200,000 less homes in negative equity territory. However, an additional 2.4 million mortgage borrowers had less than 5% equity in their homes during the same period, according to Core Logic researchers.

Combined negative equity and near negative equity homeowners’ account for 27.7% of U.S. residential properties with mortgages. About a third of all homes in the country are owned without a mortgage. Negative equity, also referred to as “underwater” usually result from falling home prices when a mortgage holder owes more on a home than it could currently sell for.

Hard hit Nevada had the highest level of underwater homeowners with nearly two out of three (63%) mortgaged homes upside down. Arizona, which was second in subprime lending behind Nevada, and second in negative equity with 50% of its homes upside down. Florida was third at 46%, followed by Michigan (36%) and California (31%). 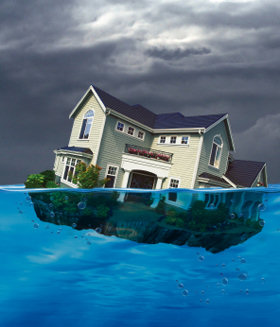 All five of the states suffering from the highest levels of underwater homeowners are on the Obama administration’s hardest hit list to receive aid for homeowners most at risk of foreclosure. But the programs have been slowed by a series of procedural flaws and other federal plans have actually helped few homeowners from losing their homes to foreclosure.

The negative share of equity in the same five states was 39%, down a slim 1% at the end of 2010. The small decline was primarily due to slight improvements in the hardest hit states. Banks and mortgage servicing companies hope it’s a trend that will continue, driving fewer homeowners to walk away from their homes as a result.

“Those in negative equity and impacted by an income shock of some kind, such as a job loss, divorce or death are much more likely to be at risk of foreclosure or a short sale,” said Core Logic chief economist Mark Fleming. “The existence of negative equity for the foreseeable future will weigh on the housing market recovery by holding back sale and refinance activity.”

The average homeowner in negative equity was upside down by $65,000, according to the study. But higher housing prices in many areas of the country showed huge disparities. New Yorkers were upside down by an average of $129,000. Massachusetts homeowners saw a difference of $120,000 and Californians an average of $93,000. But Ohio saw only $31,000 in average negative equity, the lowest in the nation.