The role of the nation’s two mortgage giants, Freddie Mac and Fannie Mae will be reduced under the long awaited housing finance reform plan proposed by the Obama administration. The proposal will also slash the amount of government-backed mortgages that are guaranteed and is intended to more widely open the market to banks and mortgage finance companies. 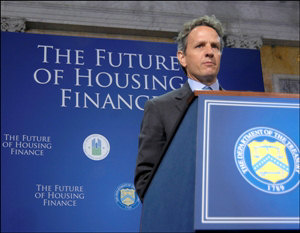 The housing plan was delivered to Congress by the Obama administration today after months of work by the White House and U.S. Treasury. “This is a plan for fundamental reform – to wind down the GSEs (Government Sponsored Entities, Freddie and Fannie), strengthen consumer protection, and preserve access to affordable housing for people who need it,” said Treasury Secretary Tim Geithner.

The plan, which is expected to take up to a decade to achieve calls for the government to wind down Fannie Mae and Freddie Mac in the wake of the financial crisis, which forced banks and mortgage companies to retreat from aggressively providing mortgages to the housing market. The two giant lenders now provide 9 out of 10 U.S. mortgages, according to the Treasury Department.

The administration’s plan, which is expected to be debated in Congress calls for greater transparency by requiring securitizers to disclose information on the credit, geographic, and demographic characteristics of the loans they package into securities and sell in financial markets, where investors lost billions of dollars as a result of the financial crisis.

A combination of efforts will be made under the program “to shrink the government’s footprint in housing finance and help bring private capital back to the mortgage market.” The program includes phasing in increased mortgage pricing at Fannie and Freddie, making mortgages more expensive for consumers to make room for other lenders to obtain more of the mortgage lending market at lower rates.

The effort is an attempt by government policymakers to get banks on a more level playing field with Fannie and Freddie so they can offer more competitive lending rates. Larger down payments, requiring at least 10% for purchases are also included under the administration’s plan for loans that will be guaranteed under Fannie Mae and Freddie Mac. 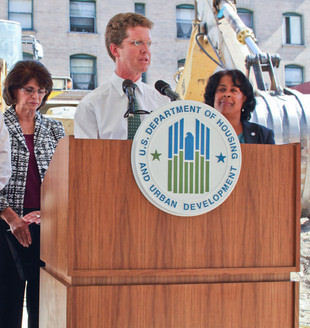 Loan portfolios of the nation’s giant mortgage lenders, which are both in bankruptcy but have been bailed-out by tax payers, would be wound down at a rate of at least 10% of their volume each year.

The housing plan also includes efforts to cut the role of FHA financing in the marketplace by reducing the size of loan limits.

“This report provides a strong plan to fix the fundamental flaws in the mortgage market and better target the government’s support for affordable homeownership and rental housing,” said Housing and Urban Development Secretary Shaun Donovan.

The administration will also form a new task force to consolidate existing housing finance agencies, including the newly formed Federal Housing Finance Agency. The task force will be created to delve into ways HUD and other government housing agencies can better work together.