Fearful of upsetting voters over the troubled economy going into mid-term elections, the Obama administration is running low on options to heal the ailing U.S. housing market. The administrations $50-billion war chest to help fight foreclosures has lapsed into a slow motion nightmare as government policy makers run out of housing relief options.

Getting people back to work will aid the overall economy and begin the long road to heal the housing market, which is why President Barack Obama unveiled a $50-billion project to repair the nation’s infrastructure, vowing to repair roads, railways and runways. 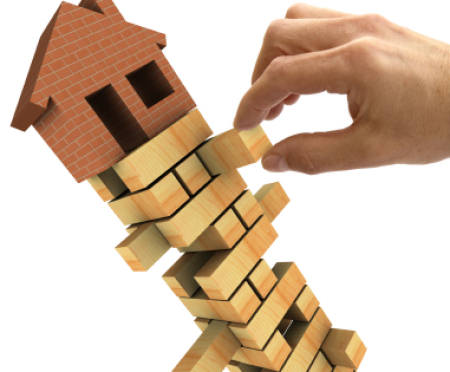 The package of infrastructure investments are part of a program to jump start the economy prior to November elections fashioned after the work relief program that President Franklin D. Roosevelt launched during the Great Depression. The large scale pursuit of infrastructure improvements provides a long term investment into the nation’s sputtering economy.

A more aggressive effort to curtail the record volume of foreclosures is politically unpalatable just weeks before the elections that could decide whether political clout is returned to Republicans.

The foreclosure crisis is caught up in the political winds of Washington, D.C. as millions of homeowners lose their homes in the worst foreclosure crisis in the country’s history. At least 9-million more mortgage holders are at risk of foreclosure, according to the Housing Predictor forecast including many who have lost their jobs or have suffered wage cuts due to corporate cut-backs.

Home sales plunged a record 27.2% to the lowest level in 15 years in July as banks repossessed the second highest number of homes on record during the month. The crisis is on track to reach more than 1.3-million formal foreclosures alone this year, according to data from Realty Trac.

The White House has made more than a dozen efforts to stem the tide of foreclosures, but has fallen short of expectations as financial experts speculate about what other options could be implemented, including the re-installment of the home buyers’ tax credit. White House officials say a renewal of the credit is unlikely.

It seems more likely that bankers will be rewarded with larger financial incentives for helping those at risk of foreclosure after November elections as more homeowners are foreclosed. The timing on any effort such as that could be difficult, however, since it would take enormous political energy and bi-partisan agreement to get such a proposal approved by divided lawmakers in Congress. If such a proposal is ever approved, it is likely to take years in Congress, where it takes the average bill that is passed into law seven years to be approved.