The housing foreclosure rescue program developed at the height of the Great Depression saved millions of homeowners from foreclosure. Nearly 40% of all mortgage holders applied for the program, half of whom were granted help through the plan. A similar program may be in the works today. 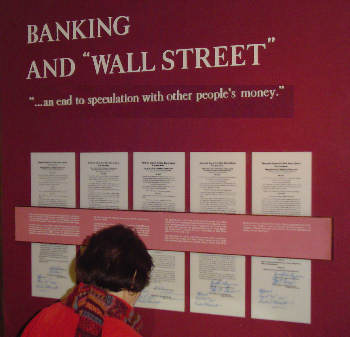 The Obama administration has delayed a decision on formulating a similar program in order to monitor housing markets and determine the need for such a program. In delaying plans to reformulate or eliminate Fannie Mae and Freddie Mac, the nation’s two largest issuers of home mortgages, the White House is taking time to develop a program to help resolve the housing crisis.

“The Making Home Affordable” program initiated by the White House has received heavy criticism for failing to deliver millions of mortgage modifications with the help of bankers.

Sooner or later it’s inevitable that the government will offer a real plan to aid homeowners at risk of foreclosure like the program during the Great Depression, which will act to heal the entire nation’s economy. How long it will take to finally pull the trigger is another question all together.

Nearly 5-million homeowners have been foreclosed so far in what is the worst foreclosure crisis in U.S. history. Another 15-million are at risk of foreclosure as forecast by Housing Predictor.

One year after President Franklin D. Roosevelt’s plan was launched, the program received applications from 40% of all mortgage holders. The program was targeted for lower income homeowners, who had been left out by the private market to refinance their homes to make payments affordable. The government program was established for homeowners who needed it the most, not just those who commercial bankers deemed “good risks.”

Despite being criticized by Wall Street, the Roosevelt era program remains a major success story.

The establishment of a similar program may be necessary if bankers are not forced to reduce mortgages to affordable levels for homeowners at risk of foreclosure, and for those who lack the equity in their homes or rigid credit worthiness required in the current marketplace to refinance.

Instead of forcing a plan on bankers to implement affordable mortgages for homeowners, President Obama is making quiet overtures in the housing mess. Under growing pressure, the Obama administration is sending a trial balloon in the form of public relations publicly announcing the possibility of banning foreclosures unless at risk mortgages have been examined for modifications.

The same type of plan is already being implemented in parts of California, Florida and Ohio among other states by state lawmakers, and it isn’t working. Bankers aren’t interested in reducing the payments for homeowners. That means they would get less money. They won’t take less unless they are forced, which would presumably take government aid.

Bankers have delayed millions of foreclosures as they wait to see what the Obama administration comes up with in the form of additional aid, which presumably would come in the form of more bail-outs. Frankly, it’s a sort of cat-and-mouse game and the bankers hold most of the cards since they hold the purse strings to mortgage lending.

Whatever the Obama administration decides to do to curtail the rising number of foreclosures it needs to act forcefully. In the end, a “New Deal” era sort of program will inevitably be forced to balance out housing markets that have been so destabilized by the financial mess.