Almost five years after the housing market collapse, the Securities and Exchange Commission (SEC) charged a bank CEO with misleading

investors about growing problems over its real estate loan portfolio.

The SEC said BankAtlantic Bancorp CEO Alan Levan made misleading statements in public filings and earnings calls in order to hide the deteriorating state of a large portion of the bank’s commercial residential real estate land acquisition and development portfolio in 2007.

Federal prosecutors say the bank and Levan then committed accounting fraud to minimize the company’s losses on their books by improperly recording loans they were trying to sell from a portfolio in 2007.

BankAtlantic, which is located in Florida where the real estate crash has suffered some of its hardest losses, knew that a large portion of the loan portfolio consisting of large tracts of land intended for residential development was deteriorating at the time, according to federal authorities.

Loan holders were already late on their mortgage payments, and some of the loans in the portfolio were kept current by the bank extending the length of the loan period or replenishing the interest reserves from an increase in loan principal.

“BankAtlantic and Levan used accounting gimmicks to conceal from investors the losses in a critical loan portfolio,” said Robert Khuzami, Director of the SEC’s Division of Enforcement. “This is exactly the type of information that is important to investors.” 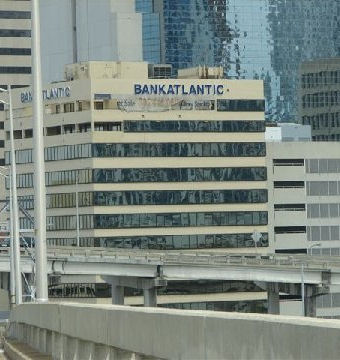 The bank CEO was aware of the negative information from participating in the bank’s Major Loan Committee that approved the extensions and principal increases, federal investigators allege. Levan was also aware that many of the loans had been internally downgraded, indicating the bank was deeply concerned about the loans standing.

“BankAtlantic and Levan publicly minimized the risks in the bank’s commercial residential loan portfolio when in reality, they had significant concerns about the borrowers’ ability to pay,” said SEC Miami director Eric Bustillo. “Investors had a right to know this key information.”

The SEC alleges that BankAtlantic’s public filings in 2007 made only “generic warnings” of what may occur in the future if Florida’s real estate downturn proceeded, and that the bank failed to disclose the downward trend that already existed in its own portfolio to investors.

During earnings calls the SEC says Levan made misleading statements to investors about the portfolio. However, BankAtlantic acknowledged problems in the third quarter of 2007, announcing a large unexpected loss. Investors were caught off-guard and the banks stock price took an immediate 37% drop.

According to the SEC’s complaint, BankAtlantic and Levan attempted to sell-off some of the loans after the announcement. However, they failed to account for them properly as being “held for sale,” which is required by Generally Accepted Accounting Principles.

The firm concealed the attempted sales from auditors and investors, the SEC said. Federal authorities are attempting to bar Levan from holding another officer or directors position in the financial industry, and are seeking financial damages from the CEO and BankAtlantic.