Only 24 U.S. banks have failed so far and had to be closed by the Federal Deposit Insurance Corporation this year, the largest decline 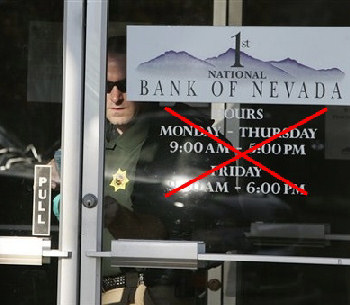 since the financial crisis started in 2008. The FDIC attributed the lower number of bank takeovers to an improving economy and an unwinding of bad mortgage debt.

“This is the lowest number of banks in three years,” said FDIC spokesperson Lajuan Williams in Washington, D.C. “It’s good to see things get better.”

Ninety-two banks failed and were taken over by the FDIC during all of 2011. Banks that are customarily closed by the government are sold to other institutions in agreements worked out with the lenders by the FDIC. The slowdown in forced closings is a positive sign for the U.S. economy.

More than two-thirds of banks (67.5 percent) reported improvements in their quarterly net income from a year ago. The share of lenders reporting losses for the quarter also fell to 10.3% from 15.7% a year ago. Lower mortgage and other loan losses and higher non-interest income were responsible for a year-over-year improvement in earnings.

Banking losses were also substantially down for the first quarter of the year, almost a third, totaling $14.3 billion across the nation, according to the FDIC. Loan sales, including mortgages for residential properties rose $2.3 billion in the quarter.