An economic development program is driving one Florida County to a recovery in housing long before the rest of the U.S. Lee County, which is home to Fort Myers, has the second highest foreclosure rating in the nation right behind Las Vegas, Nevada on a per-capita basis. But Lee County, which has severely suffered at the hands of ill-conceived financial engineering has been selected as Housing Predictor’s #1 market in the nation to recover from the housing mess.

The region has been battered by the foreclosure crisis, where home values have come down more than 80% in many neighborhoods from the markets peak. However, Lee County’s Economic Development Office has led a diversified long-term mission that was started before the real estate crash to provide new jobs. The effort is credited with bringing 4,996 new jobs to the county and nearly $1.1-billion in economic impact.

The program, launched in 1996 has become a leading showcase for communities suffering from similar downturns in states hard hit by the foreclosure crisis. Abandoned homes are scattered throughout much of Fort Myers, but neighboring communities on the outskirts of the community like Cape Coral and Lehigh Acres suffer higher tolls of loss as a result of the housing crash.

New home builders bought land on the cheap in Cape Coral and Lehigh Acres, building new tract homes for workers to purchase when they could get mortgage financing during the real estate bubble. Now five years after Florida’s housing bubble burst, at least one out of three homes is vacant in both communities, and the local economy has been devastated. Homeowners, unable to pay their mortgages due to job losses fled to find work elsewhere. 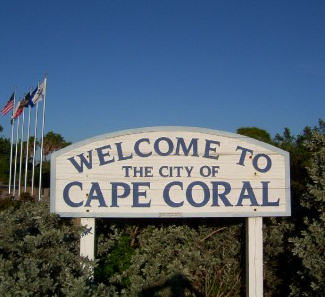 “These programs lay the foundation for companies to prosper in Lee County now and in the years to come,” said Jim Moore, Executive Director of the Fort Myers Regional Partnership. “Our Economic Development office has played a part, but most important our partners – the Horizon Council, the Horizon Foundation, and the Industrial Development Authority have made Lee County stand out as a great place to do business.”

Thirty-four companies in manufacturing, life sciences, information technology and business services have relocated or expanded in Lee county since the start of the aggressive program. This year the economic development office has launched a second campaign to develop more new jobs.

The campaign works with companies that have maximized incentives like Fort Myers- based 21 st Century Oncology, which has more than 90 radiation therapy centers across the nation. Its new local expansion will create 40 new jobs and have a direct economic impact of $2.7-million to the local economy alone.

A separate healthcare distribution center will also expand, providing dozens of new jobs for local residents. The renewed efforts paint a contrasting picture for a county that has grown from being a a beachside community located on the Gulf of Mexico to a vital urban center.

Government officials acknowledge the efforts will take years to accomplish a recovery for the local economy and provide a balance between a record high inventory of vacant homes, but the associations impact is projected to produce thousands of more new jobs to strengthen the economy.